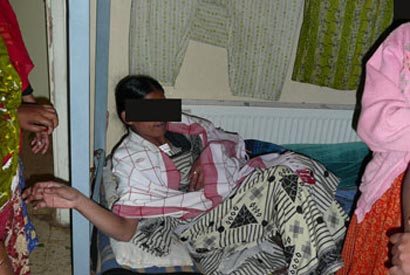 “…They have suffered routine sexual abuse and repeated rapes, and in some cases even torture. One young rape victim at the Classic factory in Jordan told us her assailant, a manager; bit her, leaving scars all over her body. Women who become pregnant are forcibly deported and returned to Sri Lanka. Women who refuse the sexual advances of Classic’s managers are also beaten and deported,” said the report, which was issued last Wednesday.

The ministry’s director of inspection and safety, Adnan Rababaa, told The Jordan Times yesterday that the ministry is dealing with the accusations mentioned in the report with utmost concern and will take action if it finds grounds for these charges.

“We formed an ad hoc committee comprising members of all concerned entities who have already started arbitrary interviews with the labourers in this particular company in order to verify the accusations in the report,” Rababaa said, adding that the ministry will officially respond to the IGLHR report within the coming few days after the investigative committee concludes its mission.

He noted that the interviews with the workers are taking place in the presence of translators in order to ensure better understanding by the workers of the committee’s task force, adding that ministry investigators take all precautionary measures to ensure the workers’ safety from employers’ retaliation.

The report highlighted that “in October 2010, 2,400 Sri Lankan and Indian workers went on strike demanding the removal of the alleged rapist, Anil, but the company’s owner, Sanal Kumar, sent Anil away and he returned after one month”. It added that the ministry has been informed several times about the sexual abuse allegations since 2007 but were not taken seriously into account.

The IGLHR noted that they are planning a visit to the Kingdom on June 17 in order to meet with the company’s administration and the workers and discuss with them the workers’ claims, urging representatives of the labels Wal-Mart and Hanes, among others, to join them.

They also called on these trademark companies to pay significant compensation to the rape victims to restore some dignity to their lives.

Meanwhile, Linda Kallash, director of the Tamkeen Legal Centre, said she met with more than 110 workers from six different garment factories, including Classic, and listened to their complaints which mainly focused on non-paid salaries, ill-treatment by their supervisors, non-payment for their overtime hours and denial of their annual leaves.

She added that at the end of her interviews, which mostly took place outside the working premises, she notified the ministry with the findings of these meetings but the ministry is yet to take action.

“Unfortunately the local authorities perceive local human rights reports with less attention compared to those issued by international human rights advocacy groups. Our goal is not to tarnish the reputation of the country, rather we seek more protection for the labourers’ rights,” she told The Jordan Times yesterday.

Fathallah Emrani, the president of the General Trade Union of Workers in Textile, Garment and Clothing Industries (GTUWTI), said their office in Al Hassan QIZ was never approached by any worker with respect to rape allegations, adding that they looked into the allegations stipulated in the report once it came out but so far no one has confirmed it.

“We don’t know how these data were collected or how credible they are; however, we are carrying out our own probe to verify the accuracy of the claims and we will take action accordingly,” he told The Jordan Times, stressing the importance of keeping open channels between the IGLHR and the GTUWTI in order to achieve positive results, Jordan Times reports.

55 Responses to Jordan probing allegations of sexual abuse at factory