Journalists should guide masses for a fruitful development process – Prof.Athugala 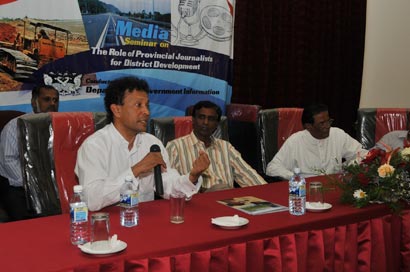 New policies and new projects are being launched for the national development of Sri Lanka.  It has become necessary to lure the people’s support for these projects and policies and inculcate an attitudinal change among them.  If this requirement is appropriately carried out, it would also in turn assist the government in reaching its targets.

Although there had been several programmes launched with this objective in the past it is not possible to quantify the success of these programmes properly.  In view of this, the Government Information Department has launched a new programme series to enlighten the masses through Provincial Journalists on the development activities of the government beig carried out in each district and to get their cooperation towards the rapid development process taking place in Sri Lanka after gaining peace from 30 years of terrorism.

The first seminar of the series, of enlightening the provincial media personnel was held in Badulla recently at the Uva Management Training Centre.  The inaugural session of the work was held with the participation of the Badulla District parliamentarian and the Minister of Irrigation and Water Management Mr. Nimal Siripala de Silva and the Chief Minister of the Uva Province Mr. Shasheendra Rajapaksa.

Minister Nimal Siripala de Silva who attended the workshop as the Chief Guest told the media personnal that under the Mahinda Chintana programme, development projects are being implemented throughout the country spending millions of rupees.  He said that to get these projects properly implemented and to divert the benefit of these projects to the masses the role to be played by the media personnel is very essential.  He said huge amounts are being spent for carpeting and renovation of roads, to provide water and electricity supplies, for development of schools, and for the development of infrastructure in the Badulla district.  It is the responsibility of the media personnel to keep the people informed of these developments and at the same time highlight the shortcomings and the requirements of the people, said the Minister.  He also said that his Ministry has taken action to develop irrigation facilities and to provide housing and land for the land slide victims in the Badulla district.  He further said that it is being planned to construct a large scale Sports Complex with all facilities including a swimming pool in the district.

The Chief Minister of the Uva Province Mr. Shasheendra Rajapaksa addressing the workshop said that he goes through the newspapers daily focusing special attention to reports about shortages and problems in the Uva Province and takes appropriate action to rectify these shortages and problems.  Therefore, he said, criticism by the media is an encouragement in the development process.

The Planning Director of the Secretariat Office of the Badulla District Mr. P.M.Jayakody Muhandiram enlightened the media personnel on the social economic situation, population status, natural resources available, employment opportunities, poverty reduction programmes, road and housing developments, water and electricity supplies, health and educational development being implemented in the District.  He explained about the development of the tea industry which is the major industry in the district and changes in the population pattern.  He also explained about the benefits being accrued by the people of the district through Gama Neguma and Divi Neguma projects.