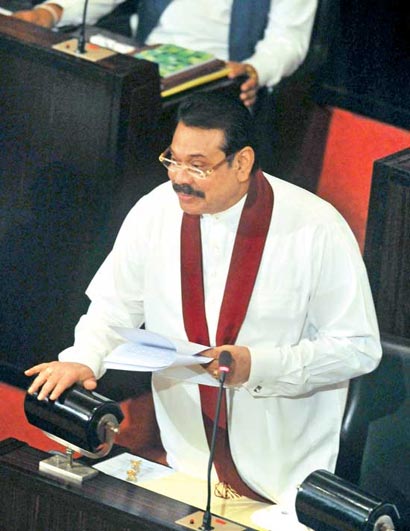 President Mahinda Rajapaksa proposed to Parliament yesterday that the state of Emergency needs to be repealed.

Making a special statement he said: “I am satisfied with the fact that there is no need of an Emergency law for the administrative activities of the country now. The country can function democratically under the ordinary law”.

President Rajapaksa added: “I inform Parliament that we will not extend the Emergency any more”.

The President also told Parliament that there have been no terrorist activities since the end of the conflict in May 2009.

“The fact has been accepted by the international community as well,” he added. “During this period through the conduct of several elections, the country moved further towards democracy. The society has accepted that these were peaceful and fair elections,” he said.

“Accordingly, in the recent past we have been removing various clauses of the Emergency regulations and steadily bringing society to normal administration,” he added. President Rajapaksa recalled that the government introduced internationally recognized laws and regulations to avoid monetary activities, exchange of goods, drug trafficking, banking and financial risks carried out by terrorists engaged in further nurturing terrorism.

“In addition to strengthening national security, we have worked towards pre-empting opportunities for terrorism to emerge through these laws and regulations,” he added.

On the success of these achievements, the President noted: “We are proud to mention that our government has succeeded in protecting the law and order and peace through rules and regulations approved by Parliament based on the constitution. Therefore, it is our responsibility to protect the democratic freedom achieved after many years.”

President Rajapaksa also emphasized the importance of having a very strong connection between the Executive and the legislature.

“In establishing a very strong connection between the Executive and Legislature, we have done a great task on behalf of the country after it was freed from terrorism. It is my belief that through the close connection between the Executive and the Legislature, it would be possible to strengthen democracy, establish sustainable good governance, strengthen the economy and further confirm the belief of the people in the process of Parliamentary democracy,” he added.

Recalling the incidents that led to the enforcement of emergency laws, the President said that the brutal terrorism launched by the LTTE coincident with the destruction of places of worship, livelihoods of the people and property in the Black July of 1983 created an unfortunate environment where the country had to be governed by Emergency Regulations.

Terrorism and insurrection in the South in 1988/89 and the systemic increase of the assassination of politicians led to justifying the continuation of Emergency Regulations, President Rajapaksa said.

The State of Emergency was removed with the signing of the Ceasefire Agreement in 2002 with international cooperation seeking to open the way to peace. However, Emergency Regulations had to be brought back with the LTTE violating this ceasefire agreement on several occasions and demonstrated the height of its terror with the assassination of Foreign Minister Lakshman Kadirgamar, he added.

The President said that since assuming office, the present government’s efforts to achieve a peacefully negotiated solution had failed due to continuing terrorist atrocities.

He said that the brutal killing of people by the LTTE at Kebithigollawa and the later closure of the Mavil Aru anicut led to the launch of a humanitarian operation.

He noted that the Emergency Regulations became necessary and useful for providing relief to a large number of innocent people who had been taken hostage by the forces of terror and were released with the liberation of the entire North and East from terror, as well as for carrying out urgent measures for their resettlement.

The President also told Parliament that the government did not use emergency regulations arbitrarily.

He said that even before 2005, there were several occasions when there were censorship of the press under Emergency Regulations.

“However, although we were compelled to carry out a massive battle against the most ruthless terrorist organization in the world, at no time in the term of our government has there been a control or censorship of the press under Emergency Regulations,” he added.

”Although some sections of the media caused grave obstacle to the humanitarian operation up to this time, we have not carried out any media censorship,” he said.

The President said that this was a very good means of showing the world that the government was engaged in a genuine humanitarian operation.

However he said: “It is with considerable regret that I state that this media freedom is been betrayed today to discredit the humanitarian operation that we carried out”.

The President observed that the humanitarian operation carried out between June 2006 and May 2009 enabled to eradicate terrorism from the country.

Since then the government has been engaged in the gigantic task of developing the affected areas and the people with much success, he added presenting relevant details to Parliament.

The President also told Parliament that within a short span of time, the government had also been able to resurrect political institutions and establish civil administration in the affected areas. ”We expect a very high level of development in this area within the next two years,” he noted.

The President noted that that the government had been able to achieve a broad level of progress in economic development during this period with the speed of economic growth rising to eight percent in 2010. “It is nurtured by all ethnicities, all religions as well as those who hold liberals and progressives views,” he added. “We have for the first time an opportunity to find solutions for problems in our country within a democratic framework and without any influence from terrorists. Therefore, on behalf of the people of this country, I request Parliament to grant this opportunity to them through Parliament,” he added while proposing to do away with emergency regulations.

US welcomes end of Emergency regulations

The United States welcomes President Rajapaksa’s announcement in Parliament that the Emergency regulations will lapse at the end of August. This is a significant step towards normalizing life for the people of Sri Lanka and reflects more than two years without terrorist activity after the defeat of the LTTE, a US embassy release said.