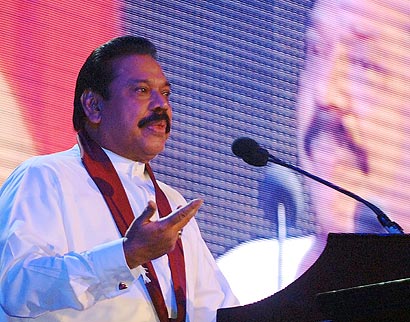 Whilst impressing on the need to safeguard the honour and dignity of the Judiciary, President Mahinda Rajapaksa said if the honour and trust in the Judiciary is affected, it will hinder proper governance of the country. He was of the view that Judges should be of exemplary conduct at all times and they should not leave any room for finger pointing at them for misconduct, which in turn will generate apprehension and misgivings towards the Judiciary and judges.

The President was addressing a gathering of ministers, parliamentarians, politicians , government officials and the public after opening a new building complex to house the Minuwangoda Pradeshiya Sabha in Udugampola yesterday.

Speaking on the same issue, President Rajapaksa said people have always treated the Judiciary with veneration.

He said people called the judges Hamudurwane to show their respect. “Other than to address Buddhist monks, people use this term only to address judges to show their trust and respect,” the President said.

He said if the President of the country is accused of any wrong doing, there were provisions in the constitution for Members of Parliament

to bring in an impeachment motion against him.

However, President Rajapaksa said the constitution also says that the President cannot dissolve Parliament in such an instance.

In connection to an impeachment against the Chief Justice of the country, the constitution says that the charges should be investigated by a Parliamentary Select Committee and after one month it should be debated and MPs should take a decision.

However, the President pointed out that if charges of misconduct are brought against a state sector employee in the administrative set up , the normal practice was to interdict him temporarily until cleared.

President Rajapaksa also recalled how a former judge some time back sought leave from the Chief Justice of the time until a pending case against him was cleared in courts.

He said there were different procedures when meting out justice depending on ones position but however in all instances the government has acted strictly in accordance with the provisions of the constitution.

President Rajapaksa said however some opposition elements who wanted corruption and malpractice to be rooted out were now protesting when efforts are made in line with constitutional provisions to do exactly that. He said some of the accused have also made it a practice to blame the government in return.

President Rajapaksa said there were attempts by some elements with vested interest to create divisions between the judiciary and legislature to stall the country’s rapid development and emphasised that what was important was for all institutions to understand the aspirations and needs of the people and work in tandem to fulfill them. “Some elements earlier tried to divide the Security Forces.

Now, they are trying to divide the Judiciary, politicise the Judiciary. We cannot allow the respect towards the Judiciary to deteriorate. We should protect and preserve these institutions,” President Rajapaksa noted. He said whatever obstacles or conspiracies, the country’s forward march in strengthening hard won peace and efforts to usher prosperity cannot be halted.

The President said he strongly believed that the public were aware of such attempts and will act in a very knowledgeable manner. Speaking on the new building which will house all branches of the Minuwangoda PS under one roof, the President said the building built entirely through funds raised by the PS, was an asset to the people of the area and its facilities will help the authorities to deliver service in a more efficient manner in line with the people’s aspirates and expectations.

2 Responses to Judges’ integrity absolute must