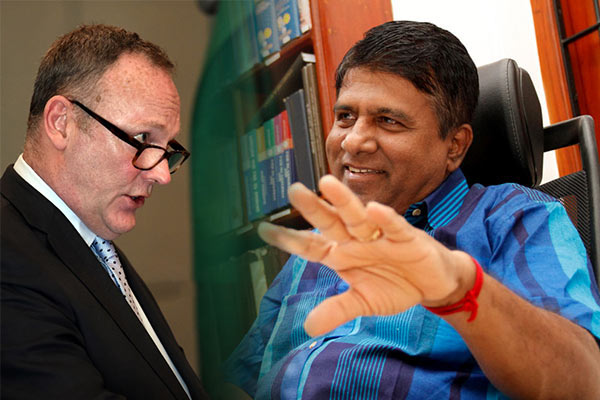 Emmerson began a five-day official visit here on July 10 to gather first-hand information about what the UN described as post-war initiatives in the area of counter-terrorism and assess how they affect the people.

Sources said Emmerson had been somewhat taken aback by Dr. Rajapakse’s outburst though the UN knew of his opposition to UN intervention here. Emmerson warned Minister Rajapakse that he would publicly announce the latter’s refusal to cooperate with the UN. The minister said that he was free to call media briefings.

Emmerson will discuss the situation at a media briefing at UN building at 202 Bauddhaloka Mawatha, Colombo 7 today at 3.00 pm. Sources said that reference would certainly be made to recent ‘clash’ with the Justice Minister.

Sources said that Minister Rajapakse had called the UN stand here unfair and unacceptable. Emmerson reported the incident to the UN.

A senior Foreign Ministry official yesterday confirmed the incident at the Justice Ministry.

A UN statement issued from Geneva before Emmerson’s arrival here quoted top British lawyer as having said, “I will seek to provide assistance in the discussion of the country’s counter-terrorism policy and legal framework as well as in the preparation and drafting of relevant legislative acts, with a view to ensuring that measures taken by the Government are in compliance with international human rights law.”

Minister Rajapakse recently called for reviewing Sri Lanka’s decision to repeal the Prevention of Terrorism Act (PTA) in the wake of those who had been demanding abolition of the legislation having to adopt draconian measures to counter terrorism. Sri Lanka has repeatedly assured the international community that the PTA would be repealed to pave the way for Anti-Terrorism Law conforming to international norms.

The Special Rapporteur will present a comprehensive report with his findings and recommendations to the UN Human Rights Council in March 2018.

Government sources said that the recent flare-up took place in the wake of Minister Rajapakse rejecting controversial report prepared by Ms. Mónica Pinto, the former Special Rapporteur on the independence of judges and lawyers following her visit to Sri Lanka and presented to Geneva Council by her successor, Diego García-Sayán. The report reiterated call for foreign judges and other experts in accountability mechanisms set up in accordance with Geneva Resolution co-sponsored by Sri Lanka in Oct 2015.