Kadir would have been alive if Mahinda had been President in August 2005 – Mrs. Kadirgamar 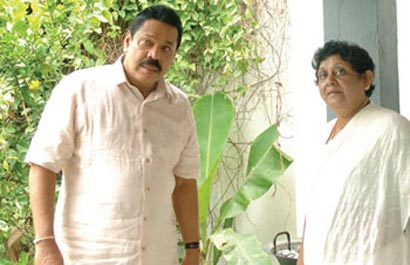 President Rajapaksa with Mrs Sugandhi Kadirgamar on Saturday at her Bullers Lane residence.

President Mahinda Rajapaksa, who attended a religious ceremony in memory of the late Laksham Kadirgamar on Saturday was visibly moved when he was told by Mrs. Sugandhi Kadirgamar that her husband would still have been alive if Rajapaksa had been the President in August 2005, when the LTTE assassinated him. Chandrika Bandaranaike Kumartunga was the President at that time.

Mrs. Kadirgamar was speaking with the President after he paid a surprise visit to her Buller’s Lane residence, where religious rites were performed followed by an alms giving to invoke blessingly on the late Kadirgamar.

TheLTTE used a sniper to assassinate the ForeignMinsiter from a nearby house while he was near his private swimming pool at night.

By the time of his assassination, Kadirgamar had fallen from grace and the State media under the Chandrika Kumaratunga government had been detailed to target him.

3 Responses to Kadir would have been alive if Mahinda had been President in August 2005 – Mrs. Kadirgamar