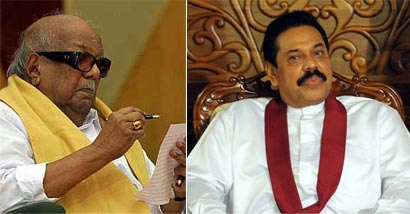 Following President Rajapaksa’s statement the elections for the Northern Council elections in Sri Lanka would be held in September 2013 DMK president M. Karunanidhi on Wednesday wondered whether Sri Lankan President Mahinda Rajapaksa had any genuine intention to hold elections to the country’s northern provincial council.

In a news item published in the Hindu Karunanidhi  suspected that that there could be a motive behind the idea of preparing electoral rolls there.

In the news item it was not revealed what the motive was.

Mr. Rajapaksa had told The Hindu that the provincial election in the north would be held in September 2013, and that those who had fled the region during the war would have to be included in the electoral rolls.

In Sri Lanka voter registration rolls are updated from time to time.

In a statement here, Mr. Karunanidhi said that while election was one issue, the shuttling of LTTE cadre from one jail to another and the death of Ganesan Nimalaruban, a cadre, had become a cause for concern.

Mr Karunanidhi said the transfer of some LTTE cadre from Vavuniya prison to the Boosa camp in the south had evoked protest from others and prison officials had lodged three cadres in solitary confinement.

“This has triggered a riot in Vavuniya prison on June 30 and 201 prisoners were transferred to  Anuradhapura. This resulted in another riot and Ganesan Nimalaruban was killed. But officials had claimed that he had died of heart attack,” he said.(EOM)

The DMK leader said Nimalaruban’s parents were not allowed to cremate his body in Vavuniya and they had cremated him near Colombo. “Even in death, Tamils are not able to get justice,” he said.