Injustices are eventually remedied. The Indian newspapers reported that ten Sri Lankan Tamils, including five children, illegally landed at Arichamunai, off Dhanushkodi, Tamil Nadu, India in the early hours of Monday 5 May 2014. It was the first influx of ‘refugees’ from Sri Lanka after the defeat of terrorism in May 2009. One of the Tamil refugees was Kathiravel Thayapararaja, said to have been tortured and killed by the Sri Lankan security forces on 13th September 2009, a story confirmed by the supposedly respected University Teachers of Human Rights (UTHR – J) in their special report. His supposed death was also mentioned in the 2010 report by The Australian Government Refugee Review Tribunal. However, Kathiravel Thayapararaja is very much alive in 2014. If K Thayapararaja was killed by security forces as alleged and reported globally how can he be alive? While both UTHR (J) and the Australian Government Refugee Review Tribunal must now tender an apology it raises the all important question of how many other ‘dead’ or accused of being killed are actually alive?

Unfolding the racket of Tamil Refugees

The disclosure by these ‘refugees’ to the Hindu newspaper journalist at the Dhanushkodi police reported that the two batches of Tamil refugees from Mannar arrived in Arichamunai because they feared for their lives following the ‘intensified’ search operations after the killing of 3 LTTE cadres attempting to revive the LTTE. The boat ride had cost one family Rs.1.2million while the other had paid Rs.50,000. Contrary to what they expected the Dhanushkodi police had not offered them refugee status but had arrested them for illegally entering India without valid documents. They were produced at a magistrate’s court and taken to Puzhal Central Prison in Chennai and remanded in judicial custody. Indian officials need to be commended for following the law.

Who are these ‘refugees’

Thayapararaja has informed the media in Tamil Nadu that he worked as an Assistant Lecturer at the University of Peradeniya in Kandy after graduation from the Peradeniya University in 2005 as an Engineer. The rest of his story covered how he lost contact with his parents and 3 sisters, that his family was in Kilinochchi and how he spent a month at a Vavuniya camp and decided to flee to Tamil Nadu. “We have come here for the sake of our children. We thought we can get into a refugee camp and move on, but things look different here,” he said.

“Kathiravel Thayapararaja, a 28-year old Tamil Electrical Engineer, is feared to have been extra-judicially executed by Sri Lanka intelligent services, after being forcefully abducted sometime second week of September, informed sources in Colombo said. Thayapararaja’s wife, Uthayakala, and the two children of her diseased sister who were under Uthayakala’s care, have now been taken under the protection and care of a Church Organization in Colombo, after being left helpless with the disappearance of her husband, unconfirmed reports said.”

The Tamilnet article is titled ‘Vanni Tech Director Thayaparan was killed by Sinhala Nazis’. What is interesting about the article is that Thayapararaja’s employer was a US NGO – VanniTech an institute formed in 2003. The Vanni Institute is said to provide IT education to North East youth and the best part is that though a US NGO it was funded by Tamil expatriate technologists and registered as a US federal tax exempt charitable organization. The employer had even reported of the ‘disappearance’ to then US Assistant Secretary of State for South Asian Affairs, former Ambassador Robert Blake.

Source 2: University Teachers for Human Rights – Jaffna (UTHR-J) in their Special Report No.34 of 13th December 2009

K. Thayapararajah, a brilliant product of the Engineering Faculty at Peradeniya was the head of the Vanni Tech, as both a civilian teacher and administrator. He would have met Charles Anthony, now dead, and a few other LTTE figures at board meetings. He fell out with the LTTE and came out of the NFZ with his family in late March, identified himself to the Army and was questioned before being sent on. He joined his family in Vavuniya for some time, went to Colombo to find his way abroad. He was arrested in September 2009 in Colombo and tortured at a security camp in Avissawella, was shot and injured on 13th September while being taken to court under escort and died at Kalubowila Hospital two days later. Such actions introduce a needless element of insecurity into the life of every Tamil. The Government did not even acknowledge the incident, leave alone investigate it, nor did the Press report it.

“A Tamil engineer was abducted in September 2009 in Colombo and murdered by state agents: Kathiravel Thayapararaja, a 28 – year old Tamil Electrical Engineer, is feared to have been extra – judicially executed by Sri Lanka intelligent services, after being forcefully abducted some time second week of September, informed sources in Colombo said. Thayapararaja’s wife, Uthayakala, and the two children of her diseased sister who were under Uthayakala’s care, have now been taken under the protection and care of a Church Organization in Colombo, after being left helpless with the disappearance of her husband, unconfirmed reports said.”

(Note: the Australian report extract is an exact word to word copy of the Tamilnet article report) 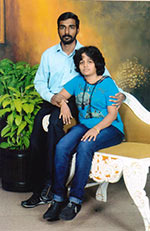 Bearing National Identity Card number 825664726V, Uthayakala hails from Nunavil, Chavakachcheri. She had been married to an LTTE cadre who following an injury had been sent to India for treatment but arrested for LTTE links in India. She is said to have had an extramarital relationship with K. Thayapararaja while he was the Director of Vanni Tech and she was a student.

She and husband Thayapararaja are also alleged to have duped numerous persons from Mullaitivu, Mannar, Colombo collecting millions of rupees promising safe passage and employment in London. She provided neither employment nor returned their money. Many such victims from Wanni have handed a letter to the Indian Consulate in Jaffna. Both husband and wife have close links to 2 NGOs run from London with links to LTTE and obviously this is a connection in the promise of lucrative jobs with their ‘foreign connection’ which in reality was a multi-million rupee racket spearheaded by pro-LTTE elements pretending to help Tamils.

In fact the news of his supposed death or extra-judicial killing has gone far and wide.

K. Thayapararajah has reappeared from the ‘dead’. In fact he has been born again for the media lost no time in reporting the abduction and killing using every adjective in the dictionary. The public was misled into believing that the Sri Lankan Security Forces were carrying out extra-judicial killings. That same media need to immediately address the injustice. The media was used to build a wrong impression against the Sri Lankan security forces, that same media need to now tender an apology alongside the entities that officially reported the death of Thayapararajah in their reports which continue to be mis-quoted by international human rights organizations as well as Navi Pillay herself.

We now wonder how many more people these international reports have ‘KILLED’ in order to make a statement against the Sri Lankan Government and the Sri Lankan security forces. The example of K Thayapararaja is excellent to show the manner in which people very much alive are portrayed as ‘dead’ and their stories are channeled across the NGO circuit and diplomatic circles and form the perfect basis to destroy the image of a nation and its armed forces.