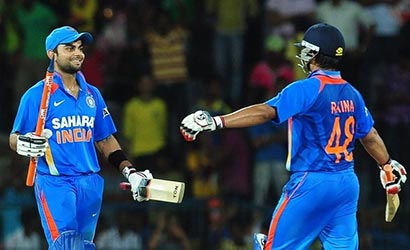 Virat Kohli was once again the architect of a successful Indian chase, one that clinched the ODI series for India – they took an unassailable 3-1 lead in the five-match competition. Kohli anchored India’s response to 251, and was helped along by Suresh Raina, who struck his third half-century of the series, each of which came in an India win. Both had their moments of fortune, just when Sri Lanka had fought their way back, but once set, they approached the target confidently, never allowing the required-rate to go above six and often being imperious in their shot-making. A game that promised to be close at one point eventually produced a comprehensive winner.

Sri Lanka had edged ahead when Manoj Tiwary was trapped in front trying to sweep Jeevan Mendis to make it 109 for 4. Kohli had survived a run-out chance when on 19 and after he lost Tiwary, it was Raina who went through some jitters. An appeal for caught-behind was turned down when on 2, a run-out was missed when he was on 19 and Mahela Jayawardene dropped a sitter at slip two balls later. Kohli then survived a close shout for lbw while on 77, and was put down after his century – though, by then, India’s task was all but complete. Sri Lanka’s fielding, though occasionally impressive, was below-par for the bulk of the game – they leaked at least 11 runs in overthrows.

Those lapses could have been decisive but were rare incidents of discomfort for the two batsmen. On a track favourably disposed to batting, such moments of anxiety were easy to put behind, as both Kohli and Raina drove assuredly through the line, used their feet well against spin and found it easy to step up and go over the top when a victory seemed within striking distance. Kohli played the supporting role when Virender Sehwag was going strong, was an equal contributor in a rebuilding stand with Tiwary and took the lead in the company of Raina. The transition from one role to the other was seamless.

Kohli began his innings with an audacious pull off Lasith Malinga but in a partnership of 49 with Tiwary, after India were 60 for 3, struck just one boundary. Both ran well between the wickets, pressing for twos with the field spread out and Tiwary appeared to be in the groove, flicking a couple of fours through the leg side. His first batting stint this series was preceded by the loss of Sehwag and Rohit Sharma in quick succession. Sehwag, after appearing set for a long knock, was caught smartly at extra cover off a leading edge and Rohit, nervous from the outset and fighting for his place in the XI, was lbw when playing across to debutant seamer Nuwan Pradeep. The umpire’s call to double-check for a no-ball only prolonged his anxiety, but he knew soon he’d fluffed another chance.

Raina was shaky to begin with but a generous dose of length deliveries gave him several opportunities to free up. After being dropped, he gradually settled in by picking off singles as Kohli was becoming increasingly dominant at the other end and eventually, in the batting Powerplay, accelerated with a sliced boundary over point off Pradeep before dispatching him for a straight six. At the start of that over, India needed 78 off 14 overs. After Raina had kick-started India’s race to the finish, Kohli made the rest of the innings a one-man show.

With the fielding restrictions still on, Kohli entered the nineties, smacking Thisara Perera over midwicket, followed by a six over the sightscreen. He reached his 13th ODI century with a pull off Malinga before thrashing Rangana Herath to different parts of the ground for four fours in an over to all but seal the game. Extra cover, square leg and deep midwicket were his preferred scoring areas, the bowlers having no answers against his powerful, and skilful, wristwork.

Though Sri Lanka finished on a high in their innings, they would, presumably, have fallen short of their desired score after choosing to bat. India’s decision to leave out a frontline bowler in Rahul Sharma – instead of the struggling Rohit – to make way for Tiwary raised eyebrows but, as it turned out, Tiwary played a crucial role in restricting the hosts.

Dinesh Chandimal was going along fluently but his knock was cut short when he swung a Tiwary long hop straight to deep square leg. The innings began to stagnate when Jayawardene miscued a sweep off Sehwag shortly after and India’s part-timers proved so effective that Zaheer Khan, their best bowler, bowled just six overs. Angelo Mathews consumed 32 deliveries for his 14 before holing out, Mendis was bowled playing the reverse-sweep and Perera was caught in the deep – all off Tiwary. This slide undermined an opening stand of 91 between Tillakaratne Dilshan and Upul Tharanga, and India’s non-regular bowlers picked up five wickets in 22 overs, conceding 112. Tiwary was an unlikely bowling hero for India; the stars with the bat had already built a solid reputation. 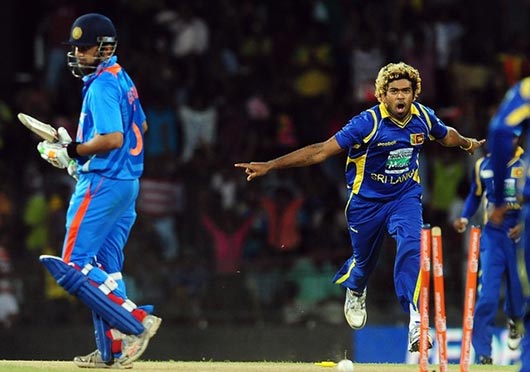