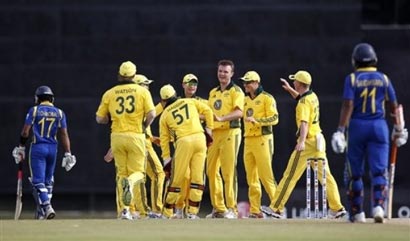 Sri Lanka has axed young batsman Dinesh Chandimal and spin bowler Rangana Herath from their squad to play Australia. All-rounder Thisara Perera has also been dropped as the hosts try to prevent defeat in the final two games of the one-day international series.

Trailing 2-1 in the five-game series, Sri Lanka have brought 26-year-old leg-spinner Seekkuge Prasanna into the squad for the fourth and fifth one-dayers at Colombo’s Premadasa Stadium.

Highly-rated 21-year-old Chandimal has failed to match his impressive form in the ODI series in England last month and has proven particularly susceptible to Australia’s pace attack of Brett Lee, Mitchell Johnson and Doug Bollinger.

Perera’s space appears to have been usurped by the rise of 26-year-old quick Shaminda Eranga, who claimed two wickets on debut in Sri Lanka’s 78-run win in game three on Tuesday.

Vice-captain Angelo Mathews is also expected to return to the line-up after missing game three with a thigh injury.

Prasanna’s call-up to replace Herath comes after he impressed for Sri Lanka ‘A’ during their tour of England over the wicket, claiming six wickets in a match against the English Lions on Sunday.

Meanwhile, Australian paceman Doug Bollinger is hoping he and his one-day teammates can set the tone for their Test counterparts by winning the one-day series against Sri Lanka.

The left-arm seamer has been on fire in the first three matches of the five-game one-day series, even managing a four-wicket haul in Tuesday’s 78-run defeat in Hambantota.

Bollinger called on his teammates to give Australia a big boost by winning the series ahead of the three Tests against the Sri Lankans beginning on August 31.

“We’ve got a few players still to come in for the Test team obviously but they get a feed off us winning in the one-dayers and I’m sure they can take that confidence into the Test series over here, definitely,’’ said Bollinger, who will not take part in the Tests after missing a spot in Australia’s 15-man squad.

“They’re (Sri Lanka) not going to go down lying down, they’re a strong outfit and you never know what can happen.

“But all of our games are in the right spot at the moment. We’re all feeling pretty confident and that’s what we need to be.’’

Bollinger and his one-day teammates travelled from Hambantota to Colombo by coach on Wednesday and have a rare day off in the Sri Lankan capital on Thursday.

The team’s first training session at the Premadasa Stadium, venue for games four and five, will be on Friday with the fourth match to be played on Saturday, Perth Now reports.