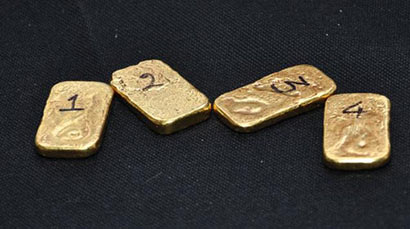 Within days after catching a passenger who had stuffed two gold biscuits in his anus, the Customs officials at Madurai airport caught another passenger for attempting to smuggle four gold biscuits by tying them with a handkerchief under his left armpit.

Joint Commissioner of Central Excise and Customs A.S. Meenalochani said that her team of officials recovered the four gold biscuits, each weighing 100 grams and costing approximately Rs. 12.3 lakh from an Indian passenger who landed here from Colombo.

She refused to disclose the name or other details of the passenger on the ground that the investigation was at the initial stages. However, the local police personnel identified the passenger as Naina Mohamed from Kanchipuram and said he was a frequent air traveller.

About 10 days ago, the Customs officials had caught another passenger for attempting to smuggle two gold biscuits by stuffing them inside his anus. That passenger too had arrived from Colombo, the only international destination connected to Madurai until the introduction of a flight to Dubai on Friday. On whether smugglers were increasingly using the Madurai airport since it was in the nascent stages of development into an international airport, Ms. Meenalochani said the seizures made by her department was a message to people taking the airport here for granted. “The smugglers have been trying every other trick in the book.

But they cannot escape the tight vigilance maintained by our officers. Though it is only 14 months since international operations began at the airport, our officers are well trained in detecting crimes,” she said. The Joint Commissioner also recalled that her team caught a passenger attempting to smuggle seven kg of amphetamine, a psychotropic substance worth about Rs.3.5 crore from a passenger bound for Malaysia through Colombo, The Hindu reports.