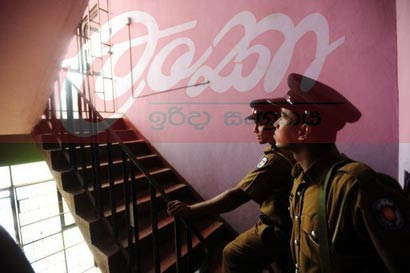 The office of ‘Lanka ’ newspaper in Sri Lanka was sealed off by officials of the Criminal Investigation Department (CID) this afternoon. This is the latest of a series of measures against the press in Sri Lanka. The weekly publication, Lanka, said the police action came a day after its editor, Chandana Sirimalwatte had been taken into custody for questioning over reports criticising a senior government official.

On Friday a Swiss Radio journalist was ordered out of the country.

Several human rights organisations said the Sri Lankan government had stepped up its harassment of journalists after President Mahinda Rajapakse’s re-election on Tuesday.

The campaign group, Human Rights Watch, says the president appears to be seizing the moment to settle scores with critics of the government.

7 Responses to ‘Lanka’ newspaper shut down