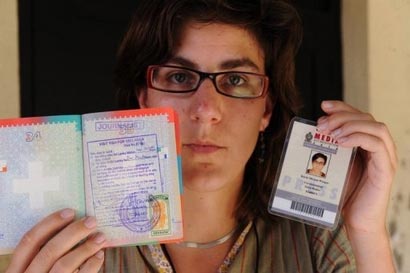 COLOMBO, Sri Lanka – An official says Sri Lanka’s president has revoked the expulsion of a Swiss radio journalist who asked a critical question at a government news conference. Karin Wenger, the South Asia correspondent for Radio DRS, had been ordered to leave the country by Monday.

A spokesman said Sunday that President Mahinda Rajapaksa told officials to revoke the expulsion order and allow Wenger to continue her work.

Wenger was accused of damaging Sri Lanka’s image by asking a critical question about last Tuesday’s presidential election, which Rajapaksa won. Critics have accused the government of manipulating the result.