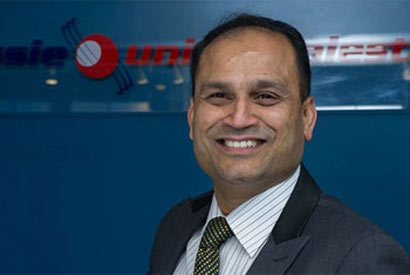 A real estate agent whose wife is expecting their first child has been stabbed to death outside his real estate business in Sydney’s west.

Police said another man had been arrested and was being questioned over the attack on 48-year-old Vissa Esan in Pendle Hill about 7.45am on Thursday.

Mr Esan, who owns Aussie Unity Real Estate on Pendle Way, arrived at work early on Thursday morning and was believed to be putting out the garbage in an alley that runs alongside his office when he was attacked.

Workers at a nearby business are believed to have tried to revive Mr Esan, while another witness ran into a nearby supermarket saying a man had been stabbed and asking staff to call triple-0.

Police said they arrived to find a man suffering a wound to his chest.

He was taken to Westmead Hospital where he died, police said.

Mr Esan, a Sri Lankan-born businessmen, migrated to Australia about 20 years ago and lived in Kellyville with his pregnant wife. (Sydney Morning Herald)