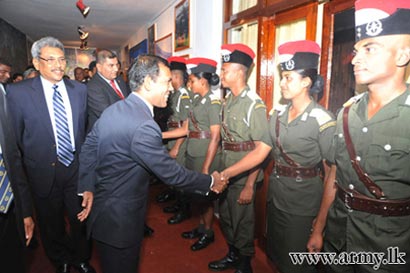 The Maldivian President Mohammed Nasheed said the Security Forces of Sri Lanka have a pivotal role to play in maintaining security and peace in the Asian region.

He was of the view that the Sri Lankan Forces cannot a rest even after ruthless terrorism was eradicated in the country.

The Maldivian President was speaking as the chief guest at the passing out of 194 Cadet Officers including a Maldivian at the Diyathalawa Military Academy yesterday.

He was participating in the commissioning parade of the officer cadets at the Sri Lanka Military Academy in Diyatalawa on the invitation of President Mahinda Rajapaksa. The Maldivian President stated that the Sri Lankan Security Forces have rendered a commendable service to establish peace and defence of the region by defeating terrorism under the leadership of President Mahinda Rajapaksa and the Defence Secretary.

President Nasheed further stated that it was more important to continue with strengthening defence and establishing peace as “we are living in a conflict stricken region.”

He added that it was upon us to strengthen the defence and keep region’s peace.

He also stated that the role of the Sri Lankan Security Forces has drastically changed in the post conflict era and he witnessed they engage in massive nation-building projects as it was the need of the nation.

He added that Sri Lanka has achieved a remarkable development after the conflict and the security forces have made considerable contribution in it as he witnesses them by himself.

He also added specially in the North and East the people are getting their dividends of peace.

He also said that the Maldives congratulates Sri Lanka for her achievements after terrorism was defeated.