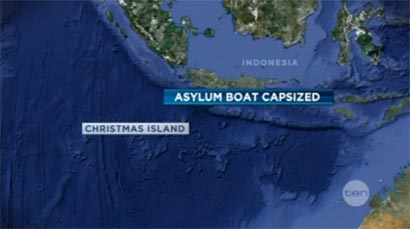 About 75 asylum seekers including SriLankana are feared dead in a mishap where a boat carrying 200 asylum seekers, capsized in Indonesian waters.

More than 40 persons were found clinging on to the upturned boat bound for Australia having set out from Sri Lanka, according to agency reports.

External Affairs Ministry’s Director General of Public Communications Sarath Dissanayake told The Island last night that he had been in contact with both the Sri Lankan High Commissioner in Canberra Retired Admiral Thisara Samarasinghe and Ambassador to Jakarta Nanda Mallawarachchi. The latter had informed him that over 100 persons had been rescued and over 50 bodies recovered.

However, they were yet to identify the bodies, Mallawarachchi had said.

“We are monitoring the developments,” Dissanayake said.

The observers immediately contacted Indonesian authorities, who were leading the rescue efforts alongside the Australian Navy, Defence and Customs.

About 200 people are believed to have been on board. West Australian Police Commissioner Karl O’Callaghan was quoted by the international media as having said that about 40 people had been spotted on the upturned hull, others were in the water and up to 75 others were feared dead.