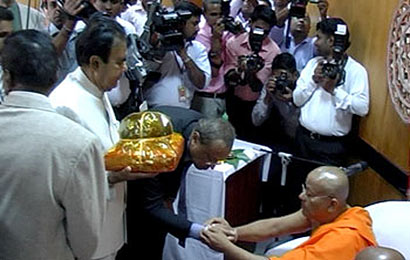 The office of the Ministry of Law and Order which was established by President on August 16 was officially declared open today. The Department of Police and the Special Task Force come under the purview of the Ministry.

The new office is situated at 13th floor, ‘Sethsiripaya, Battaramulla and was declared open by the Prime Minister D.M. Jayaratne.

The Duties of the new Ministry include;

Formulation of policies, programmes and projects in relation to the subjects of Public Security and Law & Order and subjects that come under the purview of Police Department, with a view to building a disciplined Country and a State imbued with values based on ‘Mahinda Chinthana-Vision for the Future’ and such other National Policies that may be adopted by the Government.

Direction of the implementation of such policies, programmes and projects within time lines agreed with the national planning authorities and within budgeted resources, with a view to achieving relevant objectives.

Provision of all Public Services that come under the purview of the Ministry in an efficient and people friendly manner.

Reforming of all systems and procedures to ensure the conduct of business in an efficient manner, deploying modern management techniques and technology where applicable while eliminating corruption and waste.

Maintenance of Law and Order.

All other subjects that come under the purview of the Department of Police.

Supervision of the Department of Police.