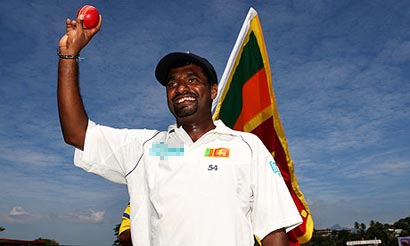 Australian Broadcasting Corporation reports that Murali’s technique will also be recorded and downloaded into the Cricket Australia’s Centre of Excellence ‘virtual bowler’ machine, if and when he visits the country as a guest spin coach in June.

Asked if there was some sense of poetic justice in this, Murali, said that he did not want to dwell on the past. “I want to look at the future. The past is gone. So we don’t need to think anything about the past,” he said.

Murali’s bent-arm bowling action was caused by a deformity from birth. But that has not stopped cricketers of the stature of Adam Gilchrist and fast bowler Jason Gillespie from making nasty remarks against Murali.

Asked if he was looking forward to being back in Australia, teaching them to bowl slow and effective, Murali said that he was still looking at accommodating the needs of Australia with that of his calendar.

Asked what Australia’s spinning problems were, he said “actually, until I go and see I will not know what the problem is. I don’t think there is a big problem. You will have to train more young bowlers to bowl spin bowling in their academies and other stages the game offers.”

Murali’s preliminary diagnosis of the problems in Australia was that since most wickets were fast-bowler friendly, most youngsters took to fast bowling, the Hindu reports.