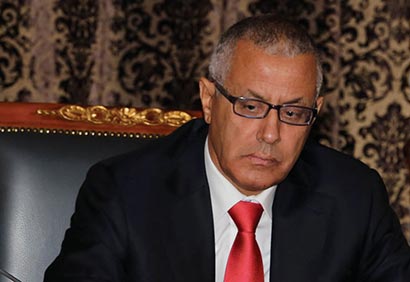 (Reuters) – Libya’s Prime Minister Ali Zeidan has been taken by force by gunmen from a hotel where he was staying in the capital Tripoli, security guards at the hotel said on Thursday.

The circumstances were unclear, but guards at the Corinthia Hotel in Tripoli said gunmen had taken the Libyan leader from the hotel. One guard described it as an “arrest”, but another told Reuters the men were militants.

Government officials could not immediately be reached to confirm Zeidan’s whereabouts.

Al-Arabiya television channel quoted Libya’s justice minister as saying that Zeidan had been “kidnapped” and showed what it said were video stills of Zeidan frowning and wearing a grey shirt undone at the collar surrounded by several men in civilian clothes pressing closely around him.

Two years after a revolution toppled Muammar Gaddafi, Libya’s fragile central government has been struggling to contain rival tribal militias and Islamist militants who control parts of the country.

Last weekend, the U.S. military captured a top al Qaeda suspect in Tripoli in a raid that angered Islamist militant groups, including one blamed for the 2012 attack on the U.S. consulate, in Benghazi.