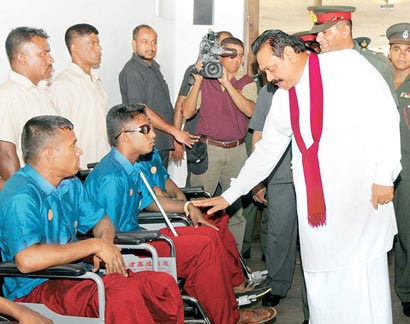 The Abimansala – a wellness resort which would provide lifetime care for totally dependent disabled War Heroes, was opened by President Mahinda Rajapaksa in Anuradhapura yesterday.

Abimansala – the first of many of its kind, includes state-of-the-art facilities in all areas and provides all inclusive care for the heroic soldiers who became totally disabled during the noble act of defending their motherland.

The President opened the facility amidst Pirith Chanting by the Maha Sangha.

Thereafter he registered the first disabled War Hero to be admitted to the facility.

Later he visited all sections of the resort personally, inspecting all the facilities available at the resort centre.

The President also spoke with all the disabled war heroes who will make the facility their future home.

It has been built on a 5.5-acre scenic location in close proximity to the Nuwarawewa. It could house 52 soldiers with permanent disabilities and is built at a cost of Rs.219.6 million. The project is sponsored mainly by the Army ‘Brave Hearts’ project spearheaded by the Seva Vanitha Army Branch. The President has been instrumental in obtaining the land for the facility. Various organizations and individuals too have provided financial and other assistance.

The construction completed within a year and has been handled entirely by the Sri Lanka Army Engineering Regiment.

The facility has a staff of 157 including doctors and specialists in various other fields.

It is equipped with modern therapeutic technological aids, much-needed by the disabled War Heroes.

The soldiers have been provided with a homely atmosphere within the facility. A separate wing to accommodate family members has also been created.

Most of these War Heroes are in the prime of their youth with a full life ahead of them, but with permanent disabilities. The majority of them are wheelchair or bed bound or impaired in their mobility, requiring a variety of assisting devices.

Therefore the facility provides specialized post injury care which cannot be obtained at domestic level and which is also vital for their survival. Most of the disabled soldiers housed at the facility are from the Anuradhapura district.

According to the Seva Vanitha Army Branch the aim of the programme is to honour and empower permanently disabled War Heroes.

It also has a recreational centre that includes a library, theatre, spa, religious centre, music room, games, etc. It has a fully equipped Kitchen and a house keeping unit, staff quarters for doctors and nurses.

The project has been designed by Vinod Jayasinghe.

According to the Army there are more than 300 soldiers who have become totally disabled with multiple injuries. Thus they plan to come up with such facilities in all the provinces.