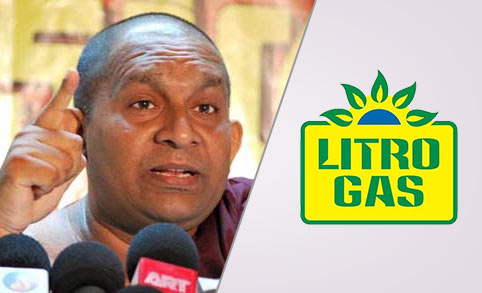 Forty persons, including Ven. Dambara Amila Thera, had received money from Litro Gas during the period 2016 and 2018 July, as a transport allowance, the Special High Court was told yesterday.

Giving evidence before the three-judge bench of the Special High Court, Litro’s Financial Controller Muditha Harashajith Tamanagama said that Amila Thera had been paid a travelling allowance of Rs. 95,000 a month from a secret account maintained by the company.

Under cross-examination of Ali Sabry, PC looking after the interests of Gamini Senarath, fomer personal assistant to President Mahinda Rajapaksa, Tamanagama said some of those who had received money from Litro Gas were politicians.

The case has been filed over 24 charges including the unlawful transfer of Rs. 500 million, Litro credited to Canvil Holdings, to Helanco Hotels and Spa Ltd and criminal breach of trust.

The witness said the Finance Ministry had directed Litro Gas to pay Ven. Amila Thera Rs. 125,000 as a travelling allowance. Aletter signed by the Executive Director of the company, its Managing Director and Human Resources Manager had been sent to him directing him to pay Rs 125,000 to the Thera on April 5,2016, Tamanagama said, adding that but he had declined to approve the payment. Thereafter, the company had paid the monk the said amount from the secret account, he said.

At this juncture Defence Counsel Ali Sabry showed a document to the witness, who identified it as the pay order endorsing the payment of Rs.95,000 to Amila Thera in July 2018.

It was marked as a document of the defence by the Defence Counsel.

The case was put off for December 7.

3 Responses to Litro paid 40 others transport allowance: Payment of Rs.95,000 to Amila Thera