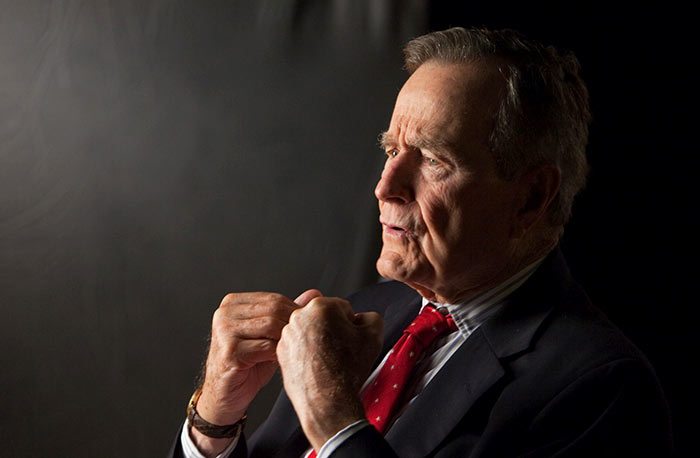 Former US President George H.W. Bush has died at age 94 in Houston, according to his spokesperson.

After his own 1980 presidential campaign came up short, he served two terms as Ronald Reagan’s vice president before reaching the pinnacle of political power by winning the 1988 presidential election, soundly defeating Democrat Michael Dukakis.

After losing the White House in 1992, Bush became a widely admired political elder who leapt out of airplanes to mark birthday milestones. Emphasizing the generosity of his soul, he forged a close — and unlikely — friendship with Democrat Bill Clinton, the man who ended his presidency. When Parkinson’s disease mostly silenced him in public, Bush flashed his sense of humor by sporting colorful striped socks.

Bush’s death comes after his wife of 73 years, Barbara Bush, passed away on April 17 at age 92. Before her funeral, Bush was pictured in a wheelchair gazing at his wife’s flower-covered casket, in a moment that encapsulated their life-long love affair.

The first sitting vice president to be elected to the presidency since 1836, Bush was also only the second person in US history to see his own son follow in his presidential footsteps when George W. Bush was elected in 2000.

In addition to the 43rd president, Bush is survived by his son Jeb, the former Florida governor and 2016 presidential candidate; sons Neil and Marvin; daughter Dorothy; and 17 grandchildren. His daughter Robin died of leukemia as a child, a tragedy that still moved Bush deeply late in his life. He will be buried alongside her and the former first lady at his presidential library in College Station, Texas.

Funeral arrangements will be announced at a later time, according to the statement released by Bush’s spokesman Jim McGrath.

When Bush left office in 1993, he joined the dubious club of presidents rejected by voters after only one term in office. A career filled with top jobs preparing him for the presidency was cut short in its prime.

He lost to Clinton after failing to shake off his image as a starchy Yankee oblivious to the struggles of heartland Americans during an economic downturn.

But as time passed, his foreign policy acumen has come to define his presidency, leaving a legacy of wise and sure-handed management of world affairs.