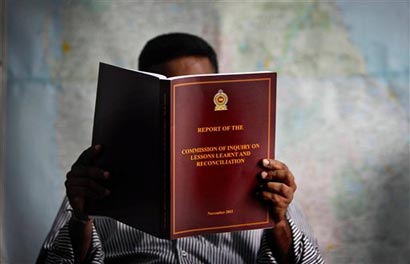 Contrary to popular expectations the Lessons Learnt and Reconciliation Commission (LLRC) presents a holistic narrative of the conflict as it unfolded between 2002 and 2009 an editorial of The Pioneer, an Indian English daily states.

The editorial under the heading Facts versus fiction: LTTE sympathisers’ lies stand exposed which many observers believe was the best editorial comment todate in an Indian English journal on Sri Lanka also states: “Even Mr. Rajapaksa’s shrillest critics, who had rubbished the report even before it was published as an attempt by the Sri Lankan government to deflect international pressure have to now concede that the Commission has made an honest effort to document the truth, even questioning some of the government’s versions of the conflict.

For far too long, certain sections of the international community have been slamming the Government of Sri Lanka led by President Mahinda Rajapaksa for human rights violations that have been allegedly committed by its security forces in the course of its successful battle against the Liberation Tigers of Tamil Eelam. Now, it is time the world stopped the rant and took note of the comprehensive report that the Government has recently released of a fact-finding commission established to look into the last and decisive phase of the conflict during which the security forces have been accused of committing atrocities against an organisation that was bent upon dismembering Sri Lanka through the use of brutal force. In May 2010, Mr Rajapaksa constituted the Lessons Learnt and Reconciliation Commission to investigate into the events that marked the seven-year-long last phase of the conflict. On December 16, 2011, the LLRC’s final report was placed before Sri Lanka’s Parliament, and contrary to popular expectation, it presents a holistic narrative of the conflict as it unfolded between 2002 and 2009.

Even Mr Rajapaksa’s shrillest critics, who had rubbished the report even before it was published as an attempt by the Sri Lankan Government to deflect international pressure, have to now concede that the Commission has made an honest effort to document the truth, even questioning some of the Government’s versions of the conflict. For instance, the LLRC report makes it clear that “considerable civilian casualties had in fact occurred during the final phase of the conflict”, and even accepts that there is a “possible implication of the security forces for the resulting death or injury to civilians”.

Similarly, the report is also decisively critical of the Government for the manner in which it has administered the Tamil-majority Northern Province – the only place in the country where Mr Rajapaksa’s popularity is on the wane.

It has also suggested several initiatives, such as key land reforms, that the Government should undertake to develop the Province. There is reason to believe that at least some of these suggestions will be implemented this year.

Now that the Rajapaksa Government has come clean on the issue, it must be allowed to concentrate on the task of rebuilding the battle-scarred island-nation.

“Critics of the Rajapaksa regime lose sight of the reality that the security forces had been pitted against a ruthless terrorist organisation which had brutalised an entire country and held it to ransom for nearly three decades. They also miss the point that the security forces stepped up the offensive after the Tamil separatists breached a 2002 ceasefire that had been agreed upon between the Army and the LTTE to create an environment for a resolution of the crisis through talks. They should now keep quiet.”