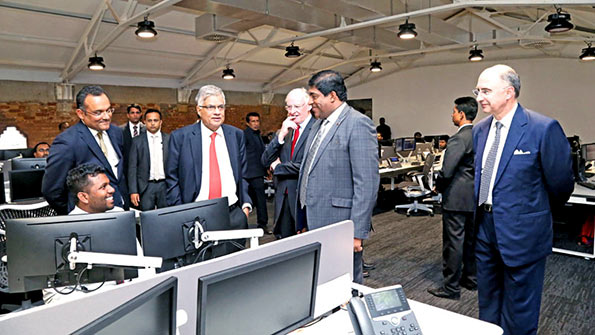 Speaking at the opening of the LSEG Technology Facility at the TRACE Expert City yesterday he said that unity governments formed by two rival political parties is not something very common in the world but it’s a success story in Sri Lanka. He also said that LSEG technology facility is a clear example of investeor confidence for the government.

“I must also say that in addition to the London Stock Exchange Group, the Volkswagen Company from Germany will also lay the foundation for their factory in Kurunegala in January and another global company too will stamp its foot print in Kurunegala early next year.

The premier also said that in addition the new lease deal for the Hambantota Harbour with a Chinese counterpart too will be inked in January and the Trincomalee Port city development with the assistance of Japanese and Singapore will commence early next year.

He also said that the proposed International Financial City in the Port City will also be an iconic investment and it would also fill a major void for the region. “Sri Lanka has been practicing Roman Dutch Law and also English Commercial Law even before the USA and Canada. “We will have new legislation drawn up to support companies setting up office there.”

“The Megalopolis development too will bring in major foreign investors to Sri Lanka and help to usher economic property to the country.”

LSEG will indirectly offer employment to over 1,200. These employees will be tasked with providing technical support services for the Group’s global network.London Stock Exchange Group has extensive experience of working in Sri Lanka through its global trading and technology business, MilllenniumIT, based in Colombo and Malabe.

LSEG Chairman Donald Brydon said that he was delighted to join the Prime Minister for the opening of our new technology facility,which will provide the best and brightest technology talent in the country with the opportunity to join a truly global markets infrastructure business.

“Given our long history and verysuccessful experience of working in Sri Lanka, it is the natural destination for LSEG’s new business services technology division.

“We would like to thank the government of Sri Lanka for their support in this venture and look forward to further developing a world leading technology hub in the country”.

Prime Minister Ranil Wickremesinghe said the state-of-the-art facility to support LSEG’s global technology operations facility in Maradana will provide employment for over 400 Sri Lankans under the first stage and a further 200 under the second stage. He said that Sri Lanka has talented youth to supply to the LSEG technology at the TRACE Expert City.

“The employees’ salaries will be definitely over than that of the the Prime Minister’s,” he quipped.