LTTE Cemeteries: A response to the BBC… 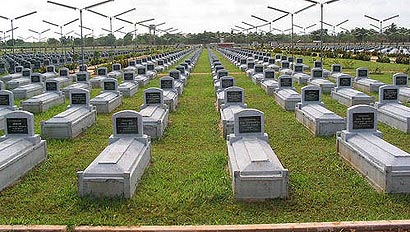 The British Broadcasting Corporation (BBC) in its news service has raised a big hue and cry over the reported demolition of a LTTE graveyard in Sri Lanka’s North.

A BBC report claimed that there was sharp criticism over the demolition of the graveyard and the construction of a Military Camp on that site. It also quoted ‘experts’ stating that the LTTE’s such large graveyards was a part of a cult of martyrdom. We do not know how the BBC assess terrorists as martyrs.

The BBC report further quotes ‘Tamil Nationalists’ criticism over the demolition of the LTTE graveyards, adding that a former Member of Parliament, M P Sivajilingam claiming that 2000 bodies of LTTE cadres had been buried there.

Sri Lanka is a democracy that recognizes legitimate Armed Forces of all countries. If the BBC visit the General Cemetery in Colombo and war cemeteries in Kandy and Trincomalee, it could witness the special graveyards with memorial stones of British soldiers killed in World War II. These plots of land have and are being well looked after by the Government of Sri Lanka giving due honour to the soldiers of the British Army, who laid down their lives when the World went to war in 1939.

Sri Lanka has a proud history. Even the tomb of King Elara who died at the hands of King Dutugemunu is still respected. Slain LTTE leader V Prabhakaran’s parents sought refuge at the hands of the Sri Lanka military. They were allowed to live peacefully until they died. They were afforded funerals with dignity and respect despite being parents of a brutal terrorist leader.

The LTTE is a ruthless terrorist organization banned even in the United Kingdom. A terrorist organization cannot have legitimate cemeteries on the soil of a sovereign state. The British Broadcasting Corporation should understand this bare fact. The LTTE was not the sole representative of the Tamils in Sri Lanka. We do not know how the BBC came across “Tamil Nationalists” to claim the reported criticism on the BBC report.

The Government of Sri Lanka reserves the prerogative and the legitimate right to build Military camps on any part of the land of the nation. Illegal cemeteries are not allowed in any part of the territory in Sri Lanka. There is an absolute necessity to bury memories the treacherous LTTE terrorist group in the interests of the future of all Tamils and the generations to come. No remnant of terrorism should be left to observe as it would affect the psychology of the Tamil youth of today and tomorrow.

Military Chief, Lieutenant General Jagath Jayasuriya had correctly told the BBC that the Army which respected with democratic rights of all people, accordingly vacated the Subhash Hotel in Jaffna occupied during the war and moved to a building on a land owned by the Prisons Department.

The statement of the Army Commander to the BBC makes it crystal clear that the LTTE had put up a graveyard on a land owned by the state. Therefore, the Government had all the right to demolish this unauthorized illegal cemetery to establish a legitimate Army Camp in that premises.

The BBC report quoting no authority, accuses the Government of Sri Lanka of having demolished the ancestral home of the slain LTTE Leader Velupillai Prabhakaran. This statement of the BBC is far from the truth. Prabhakaran’s ancestral home was damaged and brought to ground during the war period when the two sides resorted to heavy gun fire aimed at each other. During that period a replica of the ship that sunk with LTTE’s Kittu, located at that junction was also destroyed in the exchange of heavy gunfire. All that was much before the final war.

The BBC report states that the Government has built several memorials to the fallen Government soldiers. The British Broadcasting Corporation certainly should be aware that every legitimate Government in this world is bound to pay tribute to gallant men who have laid down their lives for the country by building memorials to remember them.

The BBC says the policy of the Government is to wipe off any trace of the LTTE to ensure that terrorist violence is forgotten. Let us tell the BBC that the Government of Sri Lanka did not only implement that policy but also enjoys such right in the interest of its nation and the people.

19 Responses to LTTE Cemeteries: A response to the BBC…

Home » LTTE Cemeteries: A response to the BBC…