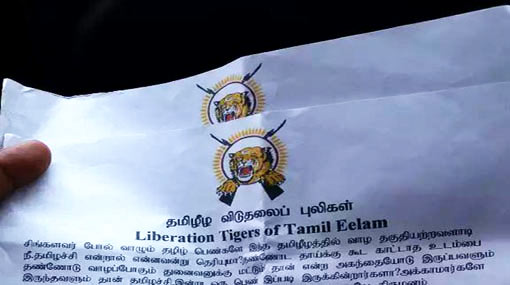 Security forces stationed in Vavuniya have reported that handbills penned by LTTE intelligence agencies were circulated among the people of Vavuniya last night (29).

The handbills that were titled ‘Liberation Tigers of Tamil Elam’ contained several statements on the activities conducted by LTTE intelligence agencies specifically targeting the behavior of women.

It has been reported that LTTE agents condemn any Tamil women interacting with Sinhalese males. It was also stated that strict action will be taken against any woman who is caught having intimate relations with a Sinhalese man.

Notably, the handbills were registered as documents drafted by the intelligence arm of the LTTE. The Police along with the Armed forces stationed in the North are currently conducting comprehensive investigations to weed out the authors of the controversial handbills.