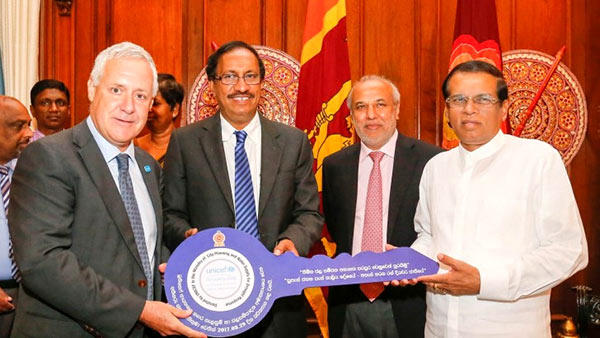 President Maithripala Sirisena has reviewed the progress of the programmes implemented by the Government to provide relief to the people affected by the drought prevailed in various parts of the country.

The President inquired from the relevant officials about the progress of the programmes during a meeting held at the Presidential Secretariat, yesterday (29).

At present, actions have been taken systematically to distribute dry rations among the economically affected people and the President Sirisena inquired about the effective implementation of this task.

He also questioned about the progress of the programme launched to provide drinking water facilities to the people and further instructed the relevant officials to purchase 100 bowsers to make this process more efficient.

President Sirisena has also deployed Tri-Forces officers to scrutinize the relief activities by the government, and their contribution towards this was also reviewed.

The President reviewed the programs implemented to provide water and food for the affected wildlife.

The President pointed out the importance of preparing for severe drought conditions which could be occurred in the future as a result of adverse weather and climate change. He explained the necessity of preparing as a country by conducting research in this regard as well as with long term plans.

Ministers Vajira Abeywardena, Anura Priyadarshana Yapa, Mangala Samaraweera, Faiszer Musthapha, Secretary to the President Austin Fernando, Secretaries of the Ministries and heads of the Security Forces were also present at this discussion.

Meanwhile, a delegation including Mr. Tim Sutton, country representative for UNICEF in Sri Lanka, officially handed over four Water Bowsers to the President, for the purpose of further expanding the supply of drinking water facilities for the people affected by the drought.

Subsequently, the President handed over the documents related to the water bowsers to the Minister of City Planning and Water Supply Rauff Hakeem, Deputy Minister Sudarshini Fernandopulle and the Ministry Secretary Mr. Sarath Chandrasiri Vithana.