Magampura takes its place in maritime maps of the world – President 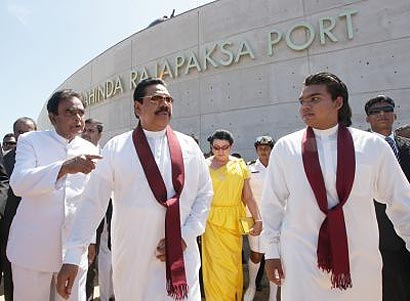 Today, we have left our mark, not only on the Sri Lankan map but also the world map. In the maritime maps of the world this will be marked as an important port, said President Mahinda Rajapaksa.

He made this statement at the ceremonial berthing of the first vessel at ‘Magama Ruhunupura Mahinda Rajapaksa Port’, Hambantota today (18 November). The ceremony also marked the commencement of the construction of the second phase of the port.

When Asia is progressing rapidly led by China and India, Sri Lanka also seeks to be a part of this emergence, he said.

When we introduced Mahinda Chintana to the nation in 2005, we Sri Lankans were deprived of many things in this country… we gave Sri Lankans, the rightful owners, everything from the fertilizer bag to the Shell Gas company… From the time when our land was sold, we are now moving to a time when we are adding to it, he further stated.

Following is the speech by President Mahinda Rajapaksa at the ceremonial berthing of the first vessel at Magampura Port.

On a day like today, election results confirmed my victory. Today is the last day of my first term. I now say goodbye to this term and will begin my new term of office tomorrow. I recall the pledge I gave my nation five years ago, when after casting my vote at the polling station at Medamulana, I promised the nation that I would bring an honoured peace to this country and also to build a new Sri Lanka. I am glad to state that I was able to fulfill both these promises within five years, even before the end of my term.

Today, we have left our mark, not only on the Sri Lankan map but also the world map. Today the Port of Magampura saw the berthing of its first ship. In the maritime maps of the world this will be marked as an important port.

When we introduced Mahinda Chintana to the nation in 2005, we Sri Lankans were deprived of many things in this country. Even though roads connected Point Pedro and Point Dendro, Sri Lankans were not free to traverse in those roads. The country was divided. Many sections and facilities of the Colombo Port were being sold. Nations assets were sold for meagre amounts. Other assets were also to be so disposed of. Our staple food was rice. Yet, our farmers’ inheritance was pesticide.

With all humility I state my pride at being able to change all this within my first term of office in the last five years and bring the country back on the right track. From the cooperative shop to the airline, we gave back to Sri Lankans. We did not own our national carrier SriLankan airlines. Now we are the owners of SriLankan and Mihin Air. We gave Sri Lankans, the rightful owners, everything from the fertilizer bag to the Shell Gas company. Not only that, we regained the 1500 sq km land, 2/3rds of the coastal belt to the Sri Lankan nation that had lost possession and control of it.

We have now laid the colossal foundation for a new Sri Lanka. A good start means almost accomplishing half of the task. Therefore, during the last five years, we have given an excellent start to the Sri Lankan nation.

In addition to this Magampura Port, we are constructing five more ports in Sri Lanka. Construction work of the Colombo-South Port is nearing completion. The Oluvil Port will also be completed soon and so will the KKS Port. The Galle Port will be developed and Trincomalee Port will be modernized. This will change our economy as well as the map of Sri Lanka by adding thousands of acres of new land to our motherland. The land extent of Southern Colombo and Hambantota will be enlarged. From the time when our land was sold, we are now moving to a time when we are adding to it.

Five ports are not too much to Sri Lanka. Unlike today, our country was home to many international ports thousands of years ago. Sri Lanka’s ports were marked in Ptolemy’s first world map. Thambapanni Port where King Vijaya disembarked was located below Mannar on the North East coast. Guests for his nuptial too, disembarked on Mahathiththa Port on the North East coast. It is to the nearby Port of Godawaya that King Gajabahu landed with thousands of followers. We also know of our other ancient ports such as Dambakolapatuna and Lanka Patuna. In fact, our forefathers, too came to our country by sailing high seas.

Sri Lanka too, like China has a grand and proud history. When the Great Wall of China was being built in your nation, our King Pandukabaya was building the fortress around the Anuradhapura city.That was the time when the same King established a ‘Grama Rajya’. I must state, there are only a handful of nations in the world that have and unbroken and continuous history of thousands of years. Our nation was at a strategic location on the Silk Route which joined your country with Europe. Thus, we are very old friends in the naval and trade sectors. In future too, this will be the same.

When Asia is progressing rapidly led by China and India, Sri Lanka also seeks to be a part of this emergence. We are today, committed to building Sri Lanka to be the Wonder of Asia by making it a five-fold hub in naval, aviation, commercial, energy and knowledge. We possess a great strength and potential to achieve this. We have shown this by

completing this stage of the Magampura Port even before its target date. This was possible due to the total commitment of the people of China and Sri Lanka. The people of Sri Lanka offer their warmest gratitude to the people and government of China.

This is not only the building of a new port but also an opportunity to develop our villages. This is a giant step taken to reverse Sri Lanka’s development history which has so far ignored the development of villages assuming it to be too difficult a task. It is a new economic world that is being built because of this port. Areas such as Magampura, Thanamalvila, Embilipitiya, Monaragala, Matara, Ratnapura and many others will develop with this port. That development brings to an end the neglect that rural villages had to face so far. From this date on, the underdevelopment of these villages will be a thing of the past. They will be raised to international levels of development.

This country does not need another port for many centuries ahead. We develop this country for the benefit of the future generations. It is their responsibility to reap the benefits of this port. It is wrong if the youth only expect jobs through this port. We have completed such a massive task to rebuild our nation.

Respected members of the Buddhist Clergy,

In the by-gone days, our country possessed a strong business community. Some of them improved their conditions by interactions with the port; through the commercial and business relations with the port.Later, they became a great force for the independence struggle of our country when it commenced. They had great love and patriotism for the country as they were the people of this soil who came from the villages. They provided a great service for the country.

Even today, we would like to see the emergence of such business people and enterprises of our own that will add great strength to our economy.

We are a nation which held commercial relations even with the Roman Empire Caesar during the times of King Bhathikabaya Tissa. Still, foreign currency and coins used those days, are still found at the Godawaya port which was seen from this point. Even today, we are can build such powerful businesses. We therefore, invite the international business community to establish industrial enterprises in special economic zones in this region.

Hundreds of vessels sail in that sea passing this point each day. We will bring them here. Our youth, our future generation must be ready to reap maximum benefit from that.

A patriotic business community which has the ability to transact with the world must emerge. They must become a group which brings foreign revenue to the country and meet the challenge of unemployment. We will continuously provide the freedom and sponsorship necessary in this task. We must have such a powerful community if we are to be an independent nation.

We look forward to the support extended to this port today to continue in the future. We must act to transform the monsoon winds that blow today into the trade winds of enterprise and profit. This will give a fillip to development of the country. I bestow this port to future generations to bring peace to the country. It is my wish that this will be a fully functional port with the completion of its next phases of development. While expressing my gratitude to all who have been committed to this great task and I wish you all a prosperous future.