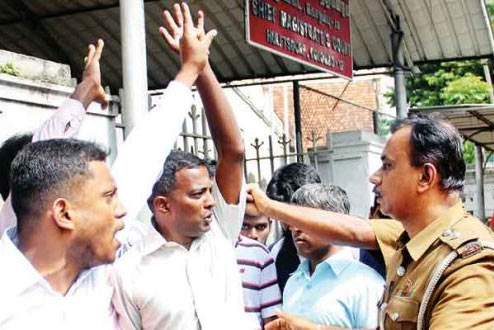 The suspects had been remanded for long periods of time after being taken into custody under Special Provisions of the Prevention of Terrorism Act, on suspicion of aiding and abetting in terrorism. No charges were ever filed against them.

The Chief Magistrate ordered that each suspect be released on two surety bonds of Rs 1 million each and banned all the suspects from travelling abroad.

The Chief Magistrate’s release order was made after instructions were received from the Attorney General.

However, officials of the Terrorist Investigation Division who represented the Plaintiff said that the Attorney General had not yet given instructions about what legal steps should be taken in connection with the LTTE suspects.

The prisoners were re-remanded until 24 November since the Attorney General’s instructions had not been received about any further action relating to the 27 suspects. They were re-remanded by Additional Magistrate Aruni Attygalle.

The Additional Magistrate issued this order when Prison officials produced the LTTE suspects who are connected with 14 Court cases filed against them under the Prevention of Terrorism Act at the Chief Magistrate’s Court in Colombo. They were accused of working as members of the LTTE organization during the Humanitarian Mission conducted in the North and within the period subsequent to that, assisting the LTTE organization, providing help and supporting the organization, providing of facilities etc.

Submitting a motion to Court yesterday afternoon, the Attorney General had requested that the cases be taken up for hearing.

Accordingly, 38 prisoners including the 27 LTTE suspects taken back to the Remand Prison were produced once again at the Chief Magistrate’s Court in Colombo yesterday evening.

Although these suspects were released on bail, there was no one to post bail on their behalf and all of them were taken back to Prison by Prison Officials.