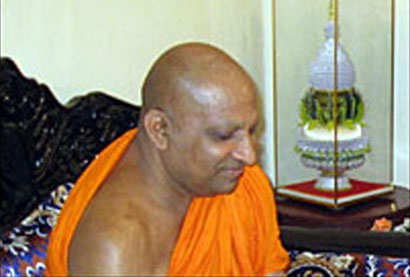 The Ven Thibbotuwawe Sri Siddhartha Sumangala Thera, the Mahanayake of the Malwatta Chapter, yesterday, expressed his dissatisfaction with the situation in the country

‘We are not satisfied with the current situation in the country, we have informed the President of this on several occasions but to no avail,” the Mahanayake Thera said during a meeting with a group of young SLFP parliamentarians led by MP Namal Rajapaksa yesterday at the Malwatta temple in Kandy.

The Mahanayake Thera further said, “Public funds allocated for development programmes should be spent gainfully and purposefully without wasteful expenditure. The government must implement an effective programme to help Dhamma schools. Dhamma schools in remotes areas are facing many hardships. They need state patronage. Senior Minister Ratnasiri Wickremanayake, when he was Prime Minister, promised to appoint Dhamma school teachers who had passed the Dharmachariya examination, as government teachers, but his proposal has not yet seen the light of the day”

Mr. Namal Rajapaksa promised to convey the Ven.Thera’s sentiments to President Mahinda Rajapaksa. He said a programme was underway, in consultation with the prime minister, to boost social values. He pointed out that the government had focused special attention on the incidents at Tangalle and Akuressa.

Meanwhile the Mahanayake Thera of the Malwatta Chapter in a letter to President Mahinda Rajapaksa has said that although in bygone days the government always gave the first place to Buddhism, the current situation was completely different.“…but today that policy has been changed and although it is mentioned in Sri Lanka’s Constitution we have to check whether the position acquired by the other religions has been received by the Buddhism. Lacking that type of background we can see that this Buddhist Island is heading towards a deteriorated condition. The country’s condition was adversely affected by the invasions of the imperialists and the administrative lapses that occurred after independence and after the recent war. The revolutionary changes that took place due to these occerrences were immense,” the letter said.

The Mahanayake also said that Buddhist values and gentle good qualities had deteriorated due to imperialist activities and present day political strategies and that they should be revived by the government, the educated elite, the venerable monks and laymen in a concerted effort. He wanted the President to organise a social recreation programme immediately.

“The Government should come forward to start a religious renaissance and a massive programme without the feelings mixed with political targets and with a righteous feeling. This should be done not tomorrow, but today. If the government took action according to the instructions given by us on national, religious and social issues the present day religious and social problems would have been solved easily,” he had said.

2 Responses to Mahanayake expresses dissatisfaction with situation in country