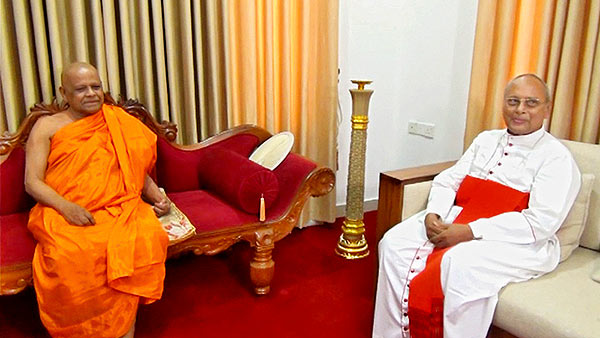 The Asgiriya, Malwatte Chapters and Colombo Archbishop Cardinal Malcolm Ranjith told the government that public opinion should be sought before signing agreements with foreign countries which could impact on the independence and sovereignty of Sri Lanka.

They expressed their opposition to any agreement which will enable the entry of foreign forces into the country and establish military bases.

They said that they are against any attempt by the Government in power to enter into agreements with any country which are detrimental to the sovereignty and the territorial integrity of the motherland.

A joint statement issued under the hands of Mahanayake of Asgiriya Chapter Most Ven Warakagoda Gnanarathana Thera, Anunayake Theras of the Malwatte Chapter Most.Ven. Niyangoda Vijithasiri Thera and Most Ven Dimbulkumbure Wimaladhamma Thera and Anunayake Theras of Asgiriya Chapter Most Ven. Wendaruwe Upali Thera and Most Ven Anamaduwe Dhammadassi Therasaidthat they have got to know that the government is prepared to sign several agreements with foreign countries which are detrimental to the sovereignty and territorial intergrity of the country.

The statement said that a government is elected by the people for a period of five years to protect and promote the well-being of the people and the sovereignty of the country.

“It is the responsibility of the government to establish rule of law by acting against the extremist organizations.The government should not make the country unstable by enteringintoagreements with foreign country at this juncture,” the joint statement said.