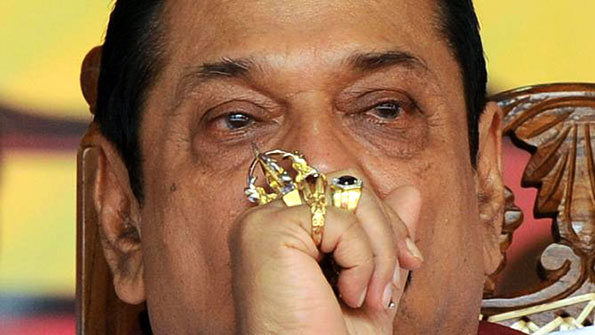 KANDY – Former President and Kurunegala District MP Mahinda Rajapaksa yesterday said in Kandy that he was among the UPFA members to be arrested soon.

The former President said: “I, too, will be arrested. We are closely watching the situation.”

The former President stressed that the SLFP hadn’t received a mandate at the last parliamentary polls to form a coalition government with the UNP. “Those who had been dis appointed by the SLFP’s action now want to establish an alternative political outfit,” Rajapaksa said.

Asked whether the speculation that he would accept the leadership of a new political party to be formed shortly had any basis Rajapaksa said: “It is natural that the people look for an alternative political force when they are taken for a ride by those elected by them. The people did not give a mandate to the Sri Lanka Freedom Party (SLFP) to join the United National party (UNP) to form a joint administration.”

Asked whether he would leave the SLFP to head another political party, Rajapaksa said he would not desert the SLFP. Nor could any force throw him out of the party, he said. “It will not be so easy to expel me from the SLFP. Why do they want to send me out of the SLFP? Is it because I reorganised and revitalised it?”

Rajapaksa said the country hadn’t gained in anyway under the present government. The economy was in a very bad shape. “During our administration the economy was healthy. Jobs were created. Development activities were in progress all over the country. Today, development projects have been suspended and war heroes deprived of their entitlements. Parents of war heroes are not getting financial assistance. Charity allowance has been pruned.”

Asked about the digging of a land belonging to a close relative of his chief bodyguard, using backhoe machines former president responded, if you have any land to cultivate yams (ala batala) you can tell me. I will just make a visit to your land and the government will till it free of charge for you.”
Kandy District parliamentarian Dilum Amunugama and several members of the Kandy Municipal Council and Pradeshiya Sabhas were present.

Devotees at the Sri Dalada Maligawa surrounded the former President Mahinda Rajapaksa and invoked the blessings of the Triple Gem and deities on him.