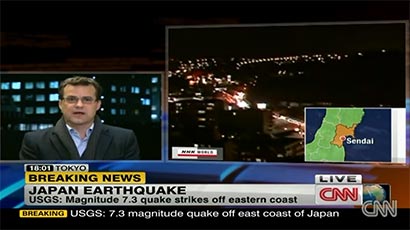 Tokyo (CNN) — A powerful earthquake struck off the northeast coast of Japan on Friday evening, rattling buildings in Tokyo and setting off a small tsunami.

It also jarred nerves in a nation still recovering from the devastating earthquake and tsunami in March 2011 that killed thousands of people and triggered the world’s worst nuclear crisis in a quarter century.

Some roads were closed and rail services suspended in the northeastern prefecture of Miyagi, where a one-meter (3-foot) tsunami rolled ashore. But there were no initial reports of damage or injuries, local police said.

Miyagi was one of the areas that suffered the worst of the destruction from the 9.0-magnitude quake and resulting tsunami in 2011.

The weaker, 7.3-magnitude quake on Friday took place further out at sea — 462 kilometers (287 miles) east-northeast of Tokyo at a depth of 36 kilometers (22 miles) — the U.S. Geological Survey said, slightly revising the initial location it gave.

It didn’t create a widespread threat of a tsunami in the Pacific, according to the Pacific Tsunami Warning Center.

The massive earthquake and tsunami in 2011 killed more than 15,000 people in Japan. It caused the formation of 30-foot walls of water that swept away rice fields, engulfed entire towns, and tossed houses and cars onto highways.

The combined natural disasters did severe damage to the Fukushima Daiichi nuclear power plant, setting off meltdowns at reactors at the facility that contaminated a large area.

Radiation levels in fish caught near the area remain high long after the meltdowns, suggesting contamination from the site might still be seeping into Pacific waters, a U.S. researcher said in October.