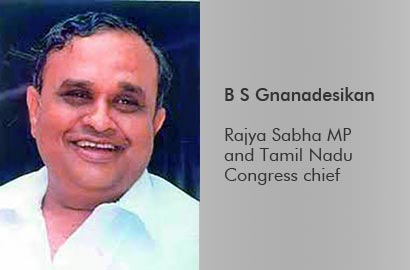 Not only the two Members of parliament from AIADMK and DMK in Tamil Nadu even the Congress Party head of the state has dropped out of the Sri LANKA trip at the last moment , the Times of India reported.

It was ultimately a much smaller team of parliamentarians, minus three MPs from Tamil Nadu, which left Delhi for Colombo on Monday for a first-hand assessment of the resettlement of war-displaced Tamils and devolution of political rights, It added.

“Following in the footsteps of a pullout by representatives of the AIADMK and the DMK from the all-party delegation, Rajya Sabha MP and Tamil Nadu Congress chief B S Gnanadesikan announced hours before the flight took off that he too had decided to withdraw from the six-day tour, the Times of India said..

“With three members of Parliament in all staying away, the 15-member team has been reduced to 12. The visit is significant to test the bilateral relationship after the March 23 vote by India against Sri Lanka at the UNHRC in Geneva on a US-sponsored resolution censuring Colombo for war crimes.

“Although Gnanadesikan cited “organizational work” to justify his pullout, he disclosed to TOI that three days ago he had sent a fax to parliamentary affairs minister Pawan Kumar Bansal opting to drop out of the Lanka tour.”