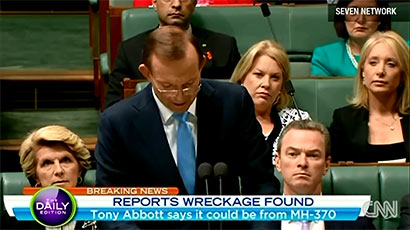 “New and credible information has come to light in relation to the search for Malaysia Airlines flight MH370 in the southern Indian Ocean,” Abbott said in the the Australian House of Representatives in Canberra. “The Australian Maritime Safety Authority has received information based on satellite imagery of objects possibly related to the search.

“Following specialist analysis of this satellite imagery, two possible objects related to the search have been identified,” he said. “I can inform the House that a Royal Australian Air Force Orion has been diverted to attempt to locate the objects.”

Three other planes will carry out a “more intensive follow-up search,” he said.

Australian search teams have been at the forefront of the hunt for the missing plane in the remote southern Indian Ocean.

The announcement from Abbott raises hopes of finding parts of the plane after a huge search that is now in its 13th day. Previous reports of debris found in the sea have not turned out to be related to the passenger jet, which vanished over Southeast Asia earlier this month.

But those reports came before the search area was massively expanded into two large arcs, one that heads northwest into Asia, the other southwest into the Indian Ocean.

The Malaysian military is checking the new information from Australian authorities, a source close to the investigation told CNN.

“Verification might take some time. It is very far and it will take some time to locate and verify the objects,” the source said.

“At this stage, Australian officials have yet to establish whether these objects are indeed related to the search for MH370,” Hishammuddin said.

Other pieces of information related to the investigation into the plane’s disappearance had emerged Wednesday.

Investigators looking at the flight simulator taken from the home of Capt. Zaharie Ahmad Shah, the pilot of the plane, have discovered that some data had been deleted from it, Hishammuddin said at a news conference.

What the revelation means is unclear. It could be another dead end in an investigation that has been full of them so far, or it could provide further evidence for the theory that one or more of the flight crew may have been involved in the plane’s disappearance 12 days ago.

“It may not tell us anything. It’s a step in the process,” one U.S. law enforcement source told CNN. “It could be a very insignificant detail in the process.”

Investigators have been looking into the background of all 239 passengers and crew members aboard the plane that vanished in the early morning hours of March 8 while en route from the Malaysian capital of Kuala Lumpur to Beijing.

Particular attention has focused on the pilot and first officer on Flight 370, but authorities have yet to come up with any evidence explaining why either of them would have taken the jetliner off course.

Hishammuddin didn’t say what had been deleted, but simulation programs can store data from previous sessions for later playback. He also did not say who might have deleted the data.

Specialists are examining the simulator in hopes of recovering the data that was deleted, Hishammuddin said.

Among them are experts at the FBI’s forensics lab in Quantico, Virginia, who are examining a copy of the simulator’s hard drive, as well as a copy of the hard drive from the computer of co-pilot Fariq Ab Hamid, law enforcement sources told CNN.

The FBI examination of the computer drives involves sorting through a large volume of data, according to a senior U.S. official with knowledge of the investigation.

“It is going to take some period of time, but we are analyzing it with a great degree of urgency. It is prioritized right at the top because the world is trying to figure this out,” the official said on condition of anonymity.

Deleted files from Shah’s simulator could reveal it had been used to practice diverting the plane and flying it to an unfamiliar airport, experts said. But even if investigators retrieve past simulations showing that Zaharie practiced flying to seemingly odd locations, that doesn’t necessarily indicate evidence of anything nefarious, said Mary Schiavo, a CNN aviation analyst and former inspector general for the U.S. Department of Transportation.

“You put in strange airports and try to land there, just to see if you can do it,” said Schiavo, adding that she sometimes does just that on the flight simulation program on her home computer.

President Barack Obama called the search for Flight 370 “a top priority,” telling KDFW of Dallas on Wednesday that the United States will keep working on it.

“We have put every resource that we have available at the disposal of the search process,” he said.

But beyond help with the computer drives, the Malaysian government has not put in a formal request for additional FBI help overseas, according to the senior U.S. official.

“We have made it clear we are ready to provide help whenever they need it,” the official said. “We are grasping at straws. No one is running on anything white hot.”

More than 60 ships and 50 aircraft are participating in the search. But at least two aircraft, a Japanese search plane and a U.S. Navy P-3 Orion, sat on a runway at a Subang air base this week after Indonesia refused to allow the planes to fly through its airspace.

“From what I understand, this is an international operation,” Cmdr. William Marks, spokesman for the U.S. Navy’s 7th Fleet, told CNN by telephone. “…I’m confident we’re going to be flying today or very soon.”

Later, Indonesia’s military spokesman told CNN clearance was given to all search planes.

Although the search area spans nearly 3 million square miles, a U.S. government official familiar with the investigation said the missing plane is most likely somewhere in the southern Indian Ocean.

“This is an area out of normal shipping lanes, out of any commercial flight patterns, with few fishing boats, and there are no islands,” the official said, warning that the search could well last “weeks and not days.”

The lack of progress has angered and frustrated families, who have accused Malaysian officials of withholding information.

Some family members staged a protest at the Kuala Lumpur hotel where media covering the search are staying. Their efforts were cut short by security guards who removed them through a crush of reporters, dragging one as she screamed.

“I don’t care what your government does,” one woman shouted, referring to the Malaysians. “I just want my son back.”

The agony of the wait is also being felt by families in Beijing, the scheduled destination for Flight 370. They gather daily for a briefing with officials.

Ye Lun, whose brother-in-law is on the missing plane, says every day is the same. He and his group leave the hotel in the morning for a daily briefing, and that’s it. They go back to the hotel to watch the news on television.

In a statement, Hishammuddin said Malaysian authorities “regret the scenes at this afternoon’s press conference.”

“One can only imagine the anguish they are going through,” he said of the families. “Malaysia is doing everything in its power to find MH370 and hopefully bring some degree of closure for those whose family members are missing.”

An abrupt change in direction

The disappearance continues to intrigue the public and frustrate officials, who have turned up no sign of the plane despite the involvement of teams from 26 nations.

On Tuesday, a law enforcement official told CNN that the aircraft’s first major change of course — an abrupt westward turn that took the plane off its route to China and back across the Malay Peninsula — was almost certainly programmed by somebody in the cockpit.

The change was entered into the plane’s system at least 12 minutes before a person in the cockpit, believed to be the co-pilot, signed off to air traffic controllers. Two minutes after the signoff, the plane’s transponder stopped communicating details about the plane’s altitude, speed and heading.

Some experts said the change in direction could have been part of an alternate flight plan programmed in advance in case of emergency; others suggested it could show something more nefarious was afoot.

But Hishammuddin said Wednesday that “there is no additional waypoint on MH370’s documented flight plan, which depicts normal routing all the way to Beijing.”

But it didn’t make it any clearer where the plane went next. Authorities say information from satellites suggests the plane kept flying for about six hours after it was last detected by Malaysian military radar.

Malaysian authorities, who are coordinating the search, say the available evidence suggests the missing plane flew off course in a deliberate act by someone who knew what they were doing.

Investigators are looking into the background of all the passengers and crew members on board the plane, as well as its ground crew, Malaysian officials have said. They’ve received background checks for all passengers on board, with the exception of those from Russia and Ukraine, Hishammuddin said.

So far, no information of significance has been found about any passengers, Hishammuddin said.

China says it has found nothing suspicious during background checks on its citizens on the flight — a large majority of the plane’s passengers.

And some experts have warned against hastily jumping to conclusions about the role of the pilots.

“I’ve worked on many cases were the pilots were suspect, and it turned out to be a mechanical and horrible problem,” said Schiavo. “And I have a saying myself: Sometimes, an erratic flight path is heroism, not terrorism.”

Searchers are racing the clock in their efforts to find the plane and its flight-data and cockpit-voice recorders. The devices have batteries designed to send out pings for 30 days. That leaves 18 days until the batteries are expected to run out.

The task is being complicated by the scope of the search area, as well as the depth of some of the waters being searched — up to 23,000 feet (7,000 meters).

Searchers trying to find and retrieve wreckage and bodies from Air France Flight 447, which crashed into the Atlantic Ocean in 2009, had to use unmanned submarines.

It took nearly two years to find the bulk of the wreckage, including the flight data recorders, in waters nearly 12,000 feet deep. It took even longer to determine what happened to the plane.