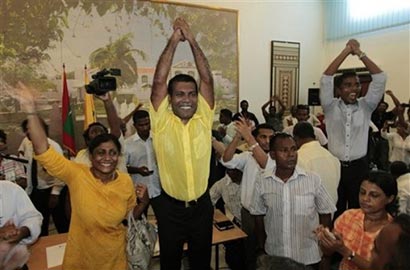 A criminal court in the Maldives issued arrest warrants for ousted president Mohamed Nasheed and his former defence minister, but the charges against them were unclear, a senior official of Nasheed’s Maldivian Democratic Party (MDP) said.

”An arrest warrant has been issued for him and his former defence minister, MDP official Adam Manik told Reuters. We have no idea (what the charges are),” they said.

Police and soldiers were reportedly on their way to arrest Nasheed, who had just met with a Commonwealth delegation in the Indian Ocean islands to mediate in the political crisis that followed his resignation on Tuesday, which Nasheed called a coup.

The new president of Mohamed Waheed, who is accused by his predecessor of taking part in a coup, today struggled to contain “anarchy” in the holiday paradise as protests and violence spread.

“Even though the appointment of a national unity Cabinet is taking time, the president made these two urgent appointments to take charge and control the spread of violence,” presidential aide Mohamed Shareef told AFP.

“What you see on the roads is anarchy,” he added. In the capital Male, thousands of pro-Nasheed protesters had clashed yesterday with security forces near the police and military headquarters, with unconfirmed media reports that three people had been killed.

The streets of the city were calm today following heavy overnight rain that had turned to a steady drizzle by the early morning.

Waheed was sworn in Tuesday just hours after Nasheed announced his resignation in a televised press conference.

Nasheed later claimed that he had been forced to step down in what was an effective coup d’etat orchestrated by opposition leaders with the backing of the security forces.

He said he suspected the coup was hatched with the knowledge of Waheed, his former vice president, and demanded that he step down immediately.

Police Chief Inspector Abdul Mannan Yoosuf confirmed that violence in the capital had spread to far flung atolls, but stressed that tourist resorts were unaffected.

The Maldives is dependent on tourism and its resorts, popular with high-end honeymooners, are mostly located on otherwise uninhabited coral islets.

Yoosuf said police were planning a “joint operation with the armed forces” to bring the situation under control.”

It is the Maldives’ worst unrest since clashes in 2003 following the death of an inmate at the hands of security forces, an event which sparked the process of democratic change on the Indian Ocean islands.

In an op-ed published in the New York Times, Nasheed reiterated his charge that a coup had taken place, and said the Maldives was sliding back into the era of “dictatorship” that preceded its first democratic elections in 2008.

“Let the Maldives be a lesson for aspiring democrats everywhere: the dictator can be removed in a day, but it can take years to stamp out the lingering remnants of his dictatorship,” Nasheed wrote.

Both Waheed and the army have categorically denied the coup charges, although a military spokesman admitted officers had “advised” him to step down.

Nasheed rose to power from grassroots opposition to the 30-year autocratic regime of former president Maumoon Abdul Gayoom, and was imprisoned on several occasions.

Opposition parties accused Nasheed of trampling over the constitution. The demonstrations were also swelled by religious conservatives who saw his administration as un-Islamic, attacking him on issues including flights carrying Israeli tourists and “improper” social conduct in resorts.

After yesterday’s clashes in Male, unrest spread to outlying islands, particularly in strongholds of Nasheed’s Maldivian Democratic Party in the north and far south.