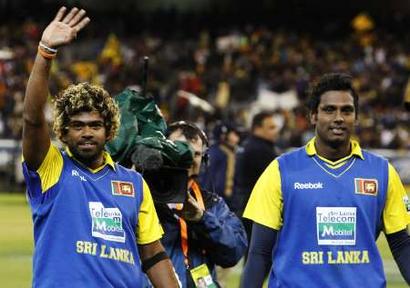 Angelo Mathews and Lasith Malinga produced one of the great one-day international fightbacks to clinch an improbable victory for Sri Lanka, extending Australia’s losing streak to six international games since July. The visitors seemed destined for a humiliating loss when they crashed to 8 for 107 chasing 240, but Mathews and Malinga kept fighting, spurred on by noisy support from a crowd dominated by Sri Lankan fans.

They compiled the highest ninth-wicket partnership in ODI history, beating a 27-year-old record set by Kapil Dev and Syed Kirmani at the 1983 World Cup, and the 132-run stand left Australia’s confidence in tatters. Malinga belted his way to his first one-day half-century and Mathews played the guiding hand with a wonderful unbeaten 77 as the pair raced towards their target with plenty of time to spare.

They had a scare when Malinga was run out with the scores level, trying for the winning single to cover, but Muttiah Muralitharan finished the job with a flick off his pads for four to fine leg off Shane Watson. It will be Muralitharan’s final international act at the MCG, where he was called for throwing 15 years ago, but this time there was nothing but roaring applause.

Apart from the debutant left-arm spinner Xavier Doherty, who had a dream start to his international career with 4 for 46, none of Australia’s bowlers looked seriously threatening against Malinga and Mathews. The stand-in captain Michael Clarke had a furrowed brow for most of the final hour, searching for a way to break the stand, but curiously did not employ the aggressive Steven Smith after the 25th over.

Malinga was the aggressor and finished with 56 from 48 balls, but Mathews was the architect of the comeback. His 84-ball innings included eight fours and one six, and was defined by a regular pinpointing of gaps in the field. Mathews struck the ball cleanly and almost never looked in danger of losing his wicket.

It was a brilliant response after several of Sri Lanka’s recognised batsmen threw their wickets away pursuing what should always have been a gettable chase. Doherty outsmarted the top order and had three wickets from his first two overs, having already effected a brilliant run-out when he hurled himself to his left at mid-on to stop a stinging Kumar Sangakkara drive then throwing from on his knees to remove Upul Tharanga, who had overcommitted to the run.

The most important victim in his 4 for 46 was Sangakkara, who was guiding the chase with a stylish innings that ended on 49. Having seen Mahela Jayawardene trapped lbw by a skiddy arm-ball from Doherty’s second delivery in Australian colours, Sangakkara played for a straight one when he tried to deftly paddle over his shoulder, only to see the ball turn past his bat to take his leg stump.

The previous ball, Doherty had picked up Chamara Silva, who injudiciously tried to slog over the leg side; his skied top edge was taken by a backpedalling Watson at mid-on. It was a superb spell from Doherty, who in one match has significantly enhanced his chances of making Australia’s squad for the World Cup, which will be played on spin-friendly subcontinental surfaces.

By the end of the contest he’d added Nuwan Kulasekara lbw, but his efforts were not enough. Things started well for Australia, when the dangerous Tillakaratne Dilshan top-edged an unwise pull off Peter Siddle and was caught at square leg, but Mathews and Malinga saved the day.

They built on the solid work of Thisara Perera, whose 5 for 46 included three quick wickets that gave the visitors an early look at Australia’s lower middle order, until Michael Hussey set up camp to guide Australia to the 50th over. Hussey entered the match fresh from 0 and 3 in a Sheffield Shield game and he was facing questions over his place in the Test side.

His limited-overs value has not been in doubt, and he ticked the score along well in a 67-run stand with Shaun Marsh, who batted in the unfamiliar No. 6 position and was caught behind off Suraj Randiv for 31. Hussey’s only boundary came from his 71st delivery and it was the ball that brought up his half-century, a strong pull over square leg off Kulasekara.

His unbeaten 71 was unattractive but effective; he struck only one boundary along with 50 singles, constructing more picket fences than you’d find in Melbourne’s outer suburbs. In other words, it was a typical Hussey one-day innings. He’d have liked a few more boundaries at the death; Australia needed more throughout their innings.

Smith had broken a 23.3-over boundary-less streak before he became Perera’s fourth victim, edging behind for 12. Perera secured his second five-wicket haul in a 13-match ODI career in the final over, when he bowled John Hastings for 16. By then, Australia had eked out a respectable total.

Sri Lanka could have chased far fewer, after Perera burst through Clarke, Brad Haddin and Cameron White in the space of two overs to leave Australia at 4 for 88. He halted the momentum Australia were building through Haddin, and by the time he bowled White with a terrific legcutter, Perera was on a hat-trick.

He’d already had Clarke caught behind by a diving Sangakkara and Haddin wonderfully taken at point, where Dilshan intercepted a searing cut. In his first ODI since March, Haddin played some excellent shots, including a perfectly-placed crunch through a small gap at cover when he backed away during Perera’s second over.

Haddin finished with 49 and it was a strong return to the opening role, where the Australians are likely to use him alongside Watson in the World Cup. But this day belonged to Mathews and Malinga, and, fittingly, to Muralitharan.