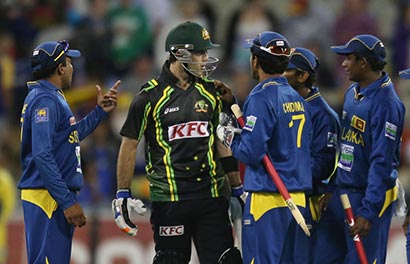 Calcutta: Australian all-rounder Glenn Maxwell seems to be having a dream run.

His efforts so far in the ongoing ODI series against the West Indies have been handy in giving Australia a 2-0 lead. Besides, Maxwell also bagged a million-dollar deal at the IPL-VI auction in Chennai, on Sunday, where franchises opted to put their money on unheralded names instead of the established ones, most of whom went unsold.

The 24-year-old Maxwell grabbed a whopping $1 million (Rs 5.3 crore) deal with Mumbai Indians, soaring above Australian captain Michael Clarke and his predecessor Ricky Ponting, both of whom were marquee players.

Maxwell may have been impressive in the ongoing series against the Windies, but ironically, he was out for a first-ball duck in Perth during the auction. He, however, did pick up four wickets.

Besides, he had been a complete failure at the ICC World T20 last year. Yet, Mumbai Indians decided to go for him in a fierce bidding war where they pipped Hyderabad Sunrisers to clinch the Victoria cricketer.

Mumbai Indians roped in Ponting as well, at the base price of $400,000. Clarke, too, was retained at his base price ($400,000) by Pune Warriors. The Warriors also bagged Sri Lanka spinner Ajantha Mendis ($725,000) and another uncapped player in South Australian pacer Kane Richardson ($700,000) ‘ the second and third in the list of top buys after Maxwell.

It certainly was a day for the little-known players as Lankan off-spinner Sachithra Senanayake, too, went much beyond his base price of $50,000, bought at $625,000 by the Kolkata Knight Riders.

Mumbai Indians and Chennai Super Kings initially bid for the Lankan before the Knight Riders entered the fray to eventually ‘win’ him.

Senanayake is tipped to be the ideal partner for ‘mystery spinner’ Sunil Narine, who had played a stellar role last year behind the Knight Riders’ maiden IPL title.

The 29-year-old McLaren, being part of Kings XI Punjab and Mumbai Indians in the previous editions, is capable of chipping in with the long handle too, coming lower down the order.

Among the Indians, all-rounder Abhishek Nayar (Pune Warriors for $675,000) along with pacers R.P. Singh and Jaydev Unadkat (both going to Royal Challengers Bangalore for $400,000 and $525,000, respectively) invited unexpectedly high bids in the auction where only 37 of the 108 players in the fray managed to find buyers.

West Indies captain Darren Sammy was purchased by Hyderabad Sunrisers for $425,000 (Rs 2.2 crore), while Australian James Faulkner also had a good day at the auction with Rajasthan Royals shelling out $400,000 (Rs 2.1 crore) for him.

Among others who got good deals were Australia’s Moises Henriques (sold for $300,000 to Royal Challengers Bangalore), temperamental New Zealand batsman Jesse Ryder ($260,000 to Delhi DareDevils).

Pacer Sudeep Tyagi and New Zealand all-rounder Nathan McCullum were roped in by Hyderabad Sunrisers at their respective base prices of $100,000.

South African all-rounder Christopher Morris, who has played just one Twenty20 International, quite literally struck gold by fetching $625,000 (Rs 3.3 crore) after starting with a measly base price of $20,000.

The 25-year-old Morris was bought by Chennai Super Kings after an intense three-way bidding war with Mumbai Indians and the Royal Challengers Bangalore.

Australian fast bowler Nathan Coulter-Nile was put on sale at a base price of $100,000 but went for $450,000 to Mumbai Indians, who outbid Rajasthan Royals.

The 25-year-old is yet to make his international debut and currently turns up only for Western Australia and Perth Scorchers in the domestic circuit.