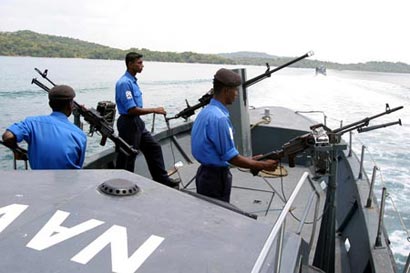 This file photo shows a Sri Lankan Coastguard unit vessel during a patrol near Colombo, on March 26, 2010. Sri Lanka’s navy on Sunday rescued more than 100 Bangladeshi and Myanmar nationals from a sinking fishing vessel off the island’s eastern coast, according to a spokesman.

One passenger was found dead while many of the 138 plucked from the boat were dehydrated, navy spokesman Kosala Warnakulasuriya said, adding that the vessel had been adrift for 10 days before it sank on Sunday.

“We sent three ships for the rescue at a location 50 miles (80 kilometres) off the eastern coast of Akkaraipattu,” Warnakulasuriya told AFP. “Some have been admitted to a local hospital.”

Among those rescued were three women and three children, he added.

Police said initial investigations showed that 11 were Myanmar nationals while the others were Bangladeshis.

“We have difficulty in communicating with the survivors so we have asked the two embassies to send us translators,” police spokesman Prishantha Jayakody told AFP.

He said statements of survivors would be recorded and they would be moved to a temporary shelter in Colombo under judicial supervision.

“We are certain that they were not trying to enter Sri Lanka, but their boat developed trouble in mid-sea and they drifted close to our shores,” Jayakody said.

Sri Lankan authorities arrested more than 1,200 people trying to leave the island illegally last year. Many of those who make the perilous journey pay up to $3,000 for a place on trawlers run by people-smugglers.

Warnakulasuriya said the passengers rescued on Sunday identified themselves as Bangladeshi and Myanmar nationals. He said they were yet to establish their port of origin or the destination.