May Day with the largest attendance in Sri Lanka’s history : No force will be allowed to rob Sri Lankans of their hard-won freedom and peace – President Mahinda Rajapaksa 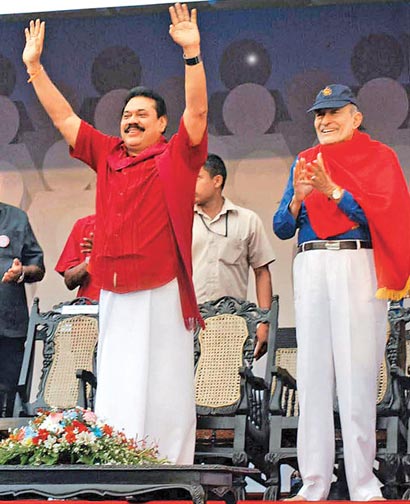 President Mahinda Rajapaksa said yesterday that no force will be allowed to deprive the country of the freedom and the peace enjoyed by the people of all communities, with the eradication of terrorism which plagued the country for over 30 years.

The President added that he was not ready to bow down for the sake of remaining in power or keeping posts and called on all the people not to betray the country for dollars or under the pretext of so called human rights violations.

“Any attempt to disrupt the peace and freedom being enjoyed by the people of all communities will deprive the country of the massive development drive and its benefits, he explained.

He said that he is committed to protecting and promoting the freedom and peace enjoyed by the people of all communities, after the eradication of terrorism by the government, at the risk of his life.

Addressing tens of thousands of people who thronged the Colombo Municipal Council grounds, irrespective of their political and any other differences to mark International Workers’ Day, the President said the working masses have always proved that they are ready to protect the motherland.

The President said the working masses of the country participated in May Day rallies demanding pay hikes or trade union rights in the past. President Rajapaksa added that the people who gathered at the CMC grounds regardless of their political and other differences, raised a single voice for protecting and promoting the freedom won by the country two years ago after a lapse of 30 years.

He said the government led by him succeeded in ending the era in which suicide cadres were trained and used to kill thousands of innocent people.

President Rajapaksa said that his government provided food and essential items to the people of the North continuously. He said that government servants in the area, which was under the control of LTTE terrorists, were provided salaries and pensions in time and the father of the LTTE leader, who was a government servant, also benefited.

President Rajapaksa revealed that the government treaded the path of peace while food and other essential items were provided to even LTTE terrorists who took arms against the government.

He said that the government was so concerned over human rights that the people rescued by the security forces were provided food beyond the food requirement recommended by the World Food Programme.

“There were only 300,000 people but the government sent food items for 350,000 people and the UN and other officials were aware of this,” he added.

He said that the authorities had to return over 3000 MT of excess food items.

The President asked whether the provision of employment to former LTTE combatants in factories instead of allowing them to wear suicide jackets and engage in suicide missions is a violation of human rights.

“Former LTTE cadres qualify for Medical Colleges and some of them are studying. Is this a violation of human rights,” he queried.

He said that those who are writing reports on Sri Lanka have never been to the North. The President added these elements are trying to bring him to the electric chair.

The President said the country witnessed several blood baths in the North and the East as well as in the South. President added that this should not happen again.

He said that millions of working masses expressed their solidarity with over 300,000 people who were rescued by the security forces at the last stages of the humanitarian operation.

He recollected how the members of the working masses in Sri Lanka helped them during the first two or three days. The President reiterated that pension benefits will be provided to people who are employed in the private sector and those who are engaged in self employment ventures.

President Rajapaksa noted that the government has drafted a Private Sector Pension Act for this purpose.

He said that he is committed to ensure pension benefits for the private sector employees and those who are self employed.

The President commended the services of expatriate workers whose contribution in terms of strengthening the country’s foreign exchange reserves helped avert many obstacles. “The government has embarked on the programme of rebuilding all infrastructure facilities destroyed by the terrorists and it cannot be realized overnight,” he said.

President Rajapaksa said the working masses were ensured all their rights by the government led by former Prime Minister S.W.R.D Bandaranaike after the 1956 national revival.

Home » May Day with the largest attendance in Sri Lanka’s history : No force will be allowed to rob Sri Lankans of their hard-won freedom and peace – President Mahinda Rajapaksa