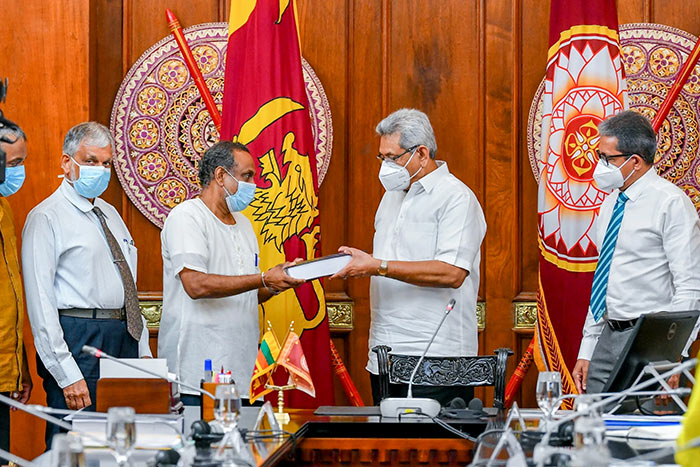 A total of US$ 10 million paid to the Yahapalana Government following signing of two phases of the Millennium Challenge Corporation (MCC) Compact is unaccounted for, it was revealed yesterday following the handing over of the final report of the Review Committee.

The final report of the MCC Review Committee was handed over to President Gotabaya Rajapaksa at the Presidential Secretariat last afternoon. The committee report will then be brought to the public attention.

Chairman of the Committee, Professor Lalithasiri Gunaruwan said the Government has signed two phases of the MCC Agreement in 2017 and 2018. He said US$ 7.4 million and US$ 2.6 million were paid under those phases, but no account details were found anywhere.

The committee’s report was compiled after a six-month study, examining the views and suggestions of many stakeholders, including expert groups, voluntary organisations, Government agencies and individuals.

The Chairman pointed out that the multi-disciplinary sector was not covered prior to the signing of the Agreement and that the Land Commissioner has made it clear that the project cannot be implemented legally.

Prof.Gunaruwan said that after the passing the project under a Parliamentary Act, it would be against the agreement to submit any opinion or resolution.

Two agents can change any condition by letter. Such a decision is a violation of supremacy of Parliament. It has created a backdrop where it is impossible for the Attorney General to appear on behalf of the Government or to go to Courts, he added.

Committee members also focused on the current situation in other countries where the MCC deal was implemented. “The fate of those countries is very sad,” he said.

Prof.Gunaruwan commended the President for the opportunity to compile a neutral report without interference from any outside party.

The President listened attentively to all matters and instructed the Secretary to the President to draw the report’s recommendations to the public.

The four-member committee was appointed with effect from 1 January 2020, following a decision of the Cabinet on 18 December 2019. Former Secretary of Transport Ministry Dr. D.S.Jayaweera,  Nihal Jayawardena (PC) and Chartered Architect Nalaka Jayaweera were the other members of the four member committee.

The committee’s interim report was handed over to the President on February 17. (GW)