Mechanism to absorb unemployed graduates to the national economy 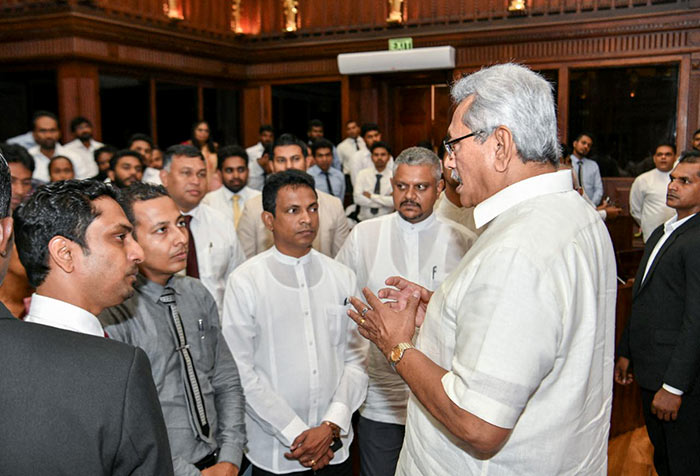 All unemployed graduates will be provided with Government jobs on an immediate basis in order to get their contribution to strengthen the national economy, President Gotabaya Rajapaksa said.

President made these remarks addressing a gathering of representatives of unemployed graduates at the Presidential Secretariat yesterday(19).

“Information on existing vacancies at government, semi-government institutes and departments have already been collected. Graduates will be immediately recruited to these positions. They will be provided with formal training and awareness on leadership skills and the public sector”

President Rajapaksa further said his objective was to build government service and employees who could fulfill their responsibility to the people and the country.

“Unskilled workers are a main source of foreign exchange.

Comparatively the country lacks industries with a solid foundation. Human resource is the main strength of the economy. Therefore, the need to properly guide the youth of the country and ensure their maximum contribution to the growth of national economy is a top priority,” the President added.

President Rajapaksa further said that people are critical of the public service due to inappropriate conduct of a few individuals. President pointed out that wrongdoings of a few government officials had brought the entire service into disrepute.

“Government officials are paid with the hard earned income of the people of this country. Hence, it is the responsibility of the public servant to deliver his or her service efficiently and diligently for the benefit of the people” President said.

President Rajapaksa went on to say that in order to increase facilities and perks given to the government official’s economic growth has to be accelerated.

“The public servants should commit themselves to achieve this objective”, emphasized the President.

The education system in the country is being subjected to major transformation to give every child the opportunity to become an active contributor of the growth of the economy. Our education system should be reformed to meet the requirements of both local and foreign job market. That should be done through a strategy based on modern technology, he further noted.

Home » Mechanism to absorb unemployed graduates to the national economy