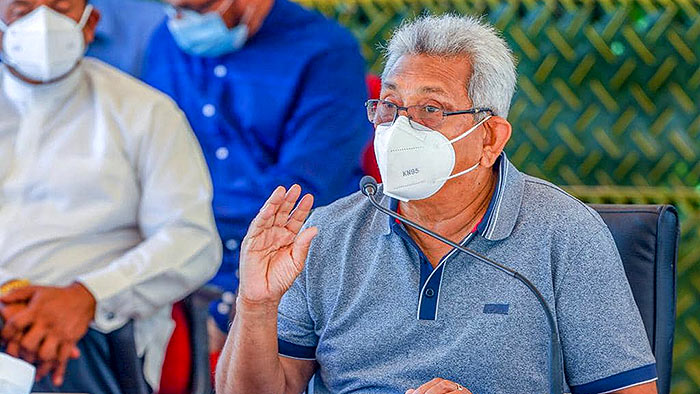 “Certain media owners want to run the country the way they want. I cannot allow that to happen,”said the President while participating in the 15th in the series of Discussion with the Village programmes held on Saturday at the Yombuweltenna village in the Walapane DS division in the Nuwara Eliya district.

President Rajapaksa also added that he has not exerted any influence on the media as the President, and he will not hesitate to take necessary legal action against such groups, if they attempt to push the country and the people backward, by abusing media freedom for the benefit of various groups and individuals.

The President is of the view that today a group of media persons who had worked against the country during the war has re-appeared and through their media institutions are attacking nationalist ideology and programmes. The majority of voters elected me as the President to rebuild this nation. Only 16 months have passed out of the 60-month long mandate. There is still considerable time ahead. Some are worried about the next President.

No one should worry in this regard as it is people’s choice. The President said that the remaining period of the tenure will be utilised to fulfill the aspirations of the people by working hard to uplift the national economy as well as the rural masses’ living standards. The responsibility of the officials is to support the people to maintain their livelihoods. People should never be oppressed. The President also stated that he did not expect any offensive act from the side of public officials that would disrupt the daily life of the people.

“I have never destroyed the environment. During the time when I was the Secretary to the Ministry of Urban Development, I have carried out work that no one had ever done for environmental conservation. Even the Independence Square was filled with garbage. That miserable situation was eliminated and the Colombo city was transformed into a green garden. A Senior Minister in the previous government had gifted a 30 acre land in the Hanthana Forest Reserve to his daughter. If they had protected the environment, they would not have had to come before the media and cry today”, the President said. During the period 2015 to 2019, 77 acres of forest lands in the Kurunegala District, 258 acres in Puttalam, 100 acres in Moneragala, 224 acres in Anuradhapura and in many other areas including Milewa, Matale, Laggala, Rideegama and Welikanna have been destroyed.

The President further said that it is ridiculous that such people pointing fingers at the government today.