Mega projects to be re-assessed 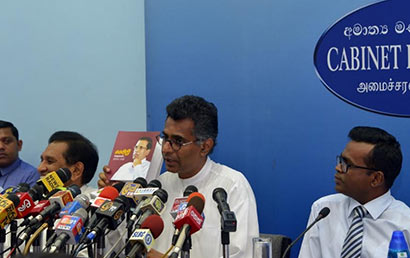 All mega projects launched by the previous Government under concessionary loan schemes will be re-evaluated, re-assessed and re-prioritised following a decision by the Cabinet of Ministers on Wednesday.

“Residents complain that sea erosion in Ratmalana and Wattala has worsened after the Port City Project was implemented,“ Minister Patali Champika said adding that these are among other issues which they would look into during the re-assessment.

“There are doubts as to the manner these mega projects were finalised, the type of Environment Impact Assessment done, tax concessions granted and the ownership of land,” Minister Ranawaka said.

The Chinese company will own one-fourth of the 230 hectares of land that will be re-claimed from the sea and the remaining will be handed over to the Government for development with foreign investment, according to the MoU signed between the Chinese investor and Sri Lanka. The entire project cost US $ 15 billion.

With the ownership of a seafront land by a country, there is a right for it to claim ownership for a certain extent of the sea – the Exclusive Economic Zone. “These are also some concerns that the committee will look into and strive to make clarifications,” he said. The estimates for some projects are alleged to be inflated and the investigations will expose the people behind these deals if the claims are proved to be true, the Minister said adding that the committee is mandated to re-assess not only the Chinese projects but all others including the Indian projects.

Home » Mega projects to be re-assessed