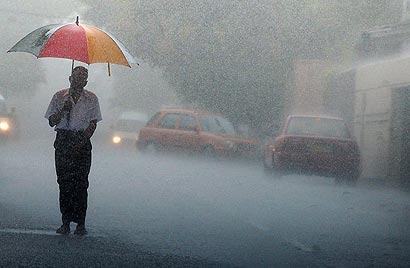 The country could expect continued rainfall ending the drought by mid-September with the beginning of the second inter monsoon, Meteorology Department Director General Lalith Chandrapala said.

He said even though evening thundershowers could be expected in these areas in the coming week, those would not be sufficient to end the dry spell.

Chandrapala said continued rainfall is necessary to end the drought.

He said such a rainfall could only be expected by mid-September with the beginning of the second inter monsoon.

Meanwhile, Irrigation Department Water Management Division Director Janaki Meegasthenna told the Daily News yesterday the drought had affected many parts of the country and was more severe than the previous droughts in 2004, 2009 and 2012.

He noted the main reason for the drought conditions was the very low rainfall experienced from the North-East Monsoon from December-February 2013.