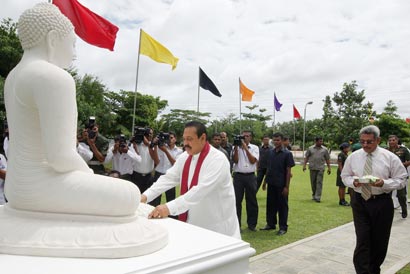 “Mihindu Seth Medura”, a new shelter for the gallant soldiers who dedicated their services for the victory of the motherland was ceremoniously opened by President Mahinda Rajapaksa this morning on 30 May. The two storied new building is located in Attidiya, Dehiwala on an area that spans across 46 acres of land at a cost of 140 million rupees. The 4th Engineering Regiment of the Sri Lanka Army has provided the labour contribution to carry out the constructions of the centre.

Mihindu Seth Medura was built under the guidance of the Ministry of Defence according to a concept of Defence Secretary Gotabaya Rajapaksa. It is established with the objective of uplifting the health and mental status of disabled war heroes who had been rendered disabled in the humanitarian operations. The Centre will be used by permanently disabled soldiers who are unable to support themselves to spend their rest of the life leisurely or as a holiday resort. They will be cared for and will receive mental and physical support.

Mihindu Seth Medura comprises of 50 rooms and is equipped with facilities such as Specialist Medical Services and Emergency Treatment. After the opening ceremony President Rajapaksa joined in with inspecting the facilities of the premises including the exercise units, bedrooms, kitchen and the toilets constructed for the use of war heroes.
President Rajapaksa also enrolled the first disabled war hero Major M.S. Ibrahim to the new centre and placed his signature on the memorial book. After the registration the President had a cordial discussion with the family members of the first inmate. He also spent time with disabled war heroes and had friendly conversations with them and their family members.

Members of the Maha Sangha including the Ven. Prof. Bellanwila Wimalarathana Thera, senior Minister of Urban Development, A.H.M. Fousie, Minister of Health Maithreepala Sirisena, many Parliamentarians, Defence Secretary Gotabaya Rajapaksa, Head of the Defense Staff, Commanders of the Armed Forces, the Inspector General Police, Senior Security Officers, large number of disable soldiers and their family members were present on the occasion.
Pictures are seen here commemoration plaque of “Mihindu Seth Madura” being unveiled, offering of flowers at the Buddha Statue and cutting the ribbon by the President and the rest of the inauguration ceremony. 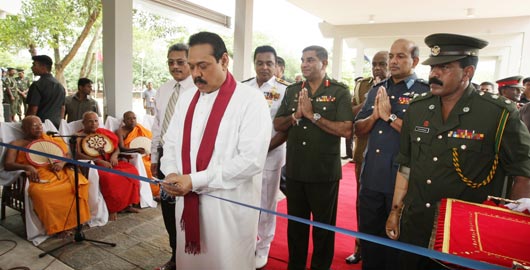 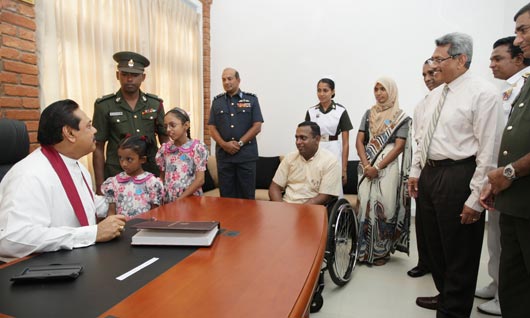 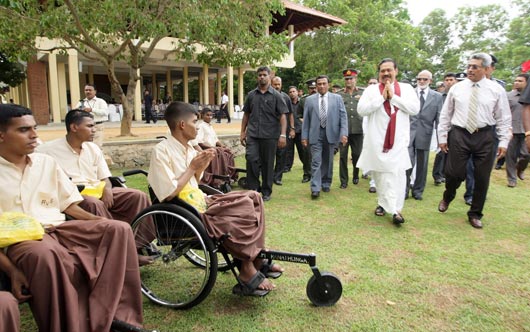 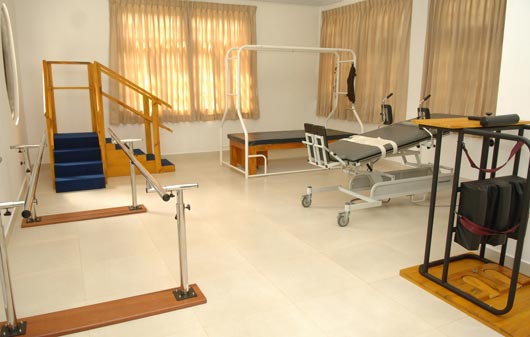