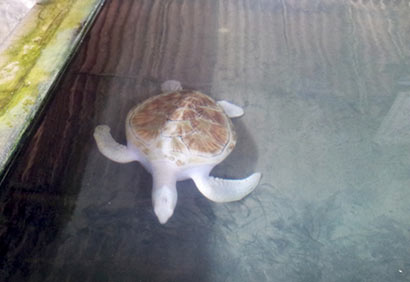 A rare species of albino turtle claimed to be worth over Rs.35 million had been stolen from a private turtle hatchery and research centre Kosgoda last night.

The five year old turtle, weighing 9.5 kg and 60 cm in length and 35 cm in width is one of the four such white turtles housed at the center.

The owner of the Center C. Chandrasiri Abbrew said that there was heavy demand for the animal during the past six months and that when the workers had turned up this morning the turtle was missing.

The sanctuary has three more white turtles that are said to be very small with the one that has been stolen being the most valuable.

The Kosgoda Police are conducting investigations into the incident.