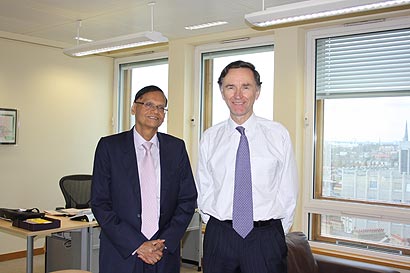 Minister Peiris outlined the recent expansion of opportunities in Sri Lanka for broadening business and trade links between the two countries following the end of conflict.  He explained that Sri Lanka was engaged in a major programme of infrastructure development while other sectors such as tourism and services have also expanded considerably in recent months.   Furthermore, arrangements such as the India-Sri Lanka and the India-Pakistan Free Trade Agreements offered major incentives for foreign companies including from the UK using Sri Lanka as an investment base for export into the vast South Asian markets. Against the background of strong bilateral links and the mutual familiarity of each others administrative, financial and legal structures it was an opportune moment for strengthening interactions in the trade and business sectors.

Lord Green responded that British businesses are keen to strengthen engagement with Sri Lanka.  In addition to the significant number of British companies already active in the country, the UK side could encourage in particular the British SME’s which are the back-bone of the British business sector. Minister Peiris invited Lord Green to lead a business delegation to Sri Lanka.

Minister Peiris also met with Alistair Burt, Parliamentary Under-Secretary of State at the Foreign and Commonwealth Office in London. The meeting was a follow-up to their meeting in Colombo in February, where avenues for further strengthening bilateral relations were discussed.