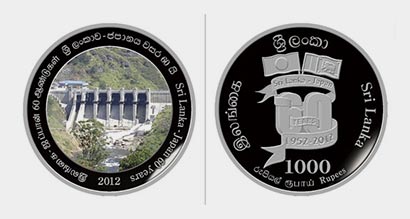 Japan will produce a commemorative coin with a face value of 1,000 Sri Lankan rupees (around ¥600) to mark the 60th anniversary of the countries’ diplomatic relations, officials said Friday.

It is the second time since the war that the Japan Mint has received an order from another country to produce coins. The first was New Zealand in 2007.

The Sri Lankan coin, which will bear a picture of a power plant built with Japanese financial aid, will be sold in both countries.

The Finance Ministry and mint have been working to win foreign coin orders. They will give some of the new coins as gifts to finance ministers and central bankers at next month’s annual meetings in Tokyo of the International Monetary Fund and World Bank.