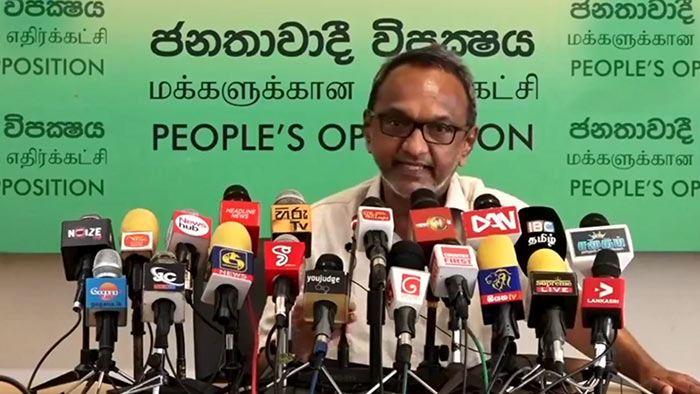 The mismanagement of permitting burials of those who succumbed to COVID-19 indicates the insensitive nature of the Government and points to a weak leadership, Samagi Jana Balawegaya (SJB) Parliamentarian Imthiaz Bakeer Markar charged yesterday.

Speaking at a press conference held at the Opposition Leader’s office, Bakeer Markar stated that by not heeding the recommendations of experts and the failure to expedite granting permission for burial of remains has tarnished the good name of Sri Lanka internationally. He was joined by Opposition MP Kabir Hashim.

“For over a year the Government has been forcibly cremating Muslims who succumbed to COVID-19. This is an extremely painful matter for grieving family members and the Muslim community. This in spite of international experts like the World Health Organisation (WHO) approving the burial of COVID-19 dead. Sri Lanka was the only country not to follow those recommendations,” Bakeer Markar said, pointing out that the image of Sri Lanka has been blackened due to such an insensitive stance by the Government.

The Opposition MP charged that recommendations made by a local expert panel was ignored by the Government for months as it dragged its feet regarding the decision to approve burial. He argued that the conflicting messaging by the Government has added to the pain and suffering of the grieving families.

“If the Government had the kind of strong leadership as it claims, they could have addressed this matter directly and much earlier. First a Gazette is issued then revoked. When Imran Khan visits, the Government says yes to burials and now they are back peddling,” the Opposition MP stressed, pointing out that the confusion over the locations of burial was not helping the situation.

Addressing the press, SJB MP Kabir Hashim charged that the Government had failed to provide relief to the public resulting in the cost-of-living soaring. MP Hashim questioned what the Government had accomplished with loans obtained in 2020 and savings gained by reduced oil prices and the policy on restricting imports. He called on the Government to be transparent regarding the loans they have obtained and how they plan to service debt in 2021.

Hashim rejected recent allegations by State Minister of Money, Capital Market and State Enterprise Reforms Ajith Nivard Cabraal blaming the previous Government for the current financial crisis, arguing that weak policies of the Government was to blame for the crisis.